Showing posts from September, 2009
Show all

September 28, 2009
I probably achieve utter absurdity with my new Strange Horizons column, "A Story About Plot", wherein, like an awkward and amateur trapeze artist who has decided the key to success is to not believe in gravity, I try to link John Grisham, Nora Roberts, Aristotle, Shklovsky, and Peter Straub. The whole thing is, I expect, more a sign of my inevitable insanity than anything else.
Read more

Jeff Ford is looking for recommendations of ghost stories:My students are presently writing ghost stories. I want to make a list of 10 of the greatest ghost stories for them to check out. What I'm looking for is your absolute favorite one (short story) -- what you believe to be the best ghost story ever written. If you have a suggestion, please post it. No need to mention "The Turn of the Screw" by James -- that's already on the list. For my very favorite, I'm torn between "The Return of Imray" by Kipling and "The Hell Screen" by Akutagawa.I chimed in with various folks recommending the work of Robert Aickman, a writer I had encountered some years back when I first got a copy of The Dark Descent, but I wasn't a sophisticated enough reader yet to understand his tales, so thought they were pointless and boring. Returning to him this past year, I suddenly discovered he was much more fascinating than I had noticed before, and I dug through…
Read more

Hybrid Books and the Marketplace of Literary Respectability

September 26, 2009
I previously mentioned the "Best of the Millennium (So Far)" list at The Millions, and Andrew Seal posted some ruminations on why the results were what they were. In the comments to his post, there's some interesting discussion, well worth reading, but one paragraph of Seal's original remarks does not seem, so far, to have been discussed, and I think it's among the most interesting of his observations, so I'm posting it here to see if anybody wants to say anything. I haven't thought too much about it, so am not proposing agreement or disagreement, just that I think it's an interesting observation about how the value of fiction is constructed in the U.S. especially (since most of the panelists are U.S.-based):
The writer-heaviness [of the panelists] also, I think, accounts for why so many of the works included are of the hybrid variety—"literary fiction" that cleverly incorporate genre (SFF, thriller) elements—while there are so few (actuall…
Read more

What is Last Drink Bird Head?

Yes, soon after Dr. Schaller (my favorite mad scientist) captured the bird, I blindly selected one of my favorite tommy guns and slaughtered the creature with panache.  I gutted it with my teeth.  I deconstructed it with a gulletful of Derrida.  I chugged a shot of ennui and belched sentences of purple bile into the airspace of downed jetliners.  I wouldn't call it a beautiful sight, but it was what I had.

Jeff VanderMeer called me a "smart ass", but I was used to that.  He'd called me worse ("cretinous wombat", "illiterate dirigible", "barbaric yawp", "Dick Cheney").

And now those words have been packaged and frozen with flash, waiting for you to take them out of the freezer and stick them in the microwave of your soul.

Go now, my minions.  Pre your order.  Feed the Wyrm and its whimsical Ministry.  Bring back souvenirs and rel…
Read more

Best of the Millennium!

The Millions polled a bunch of writers to come up with a fun list of really good books:
It’s a bit early, of course, to pass definitive judgment on the literary legacy of the ’00s, or how it stacks up against that of the 1930s, or 1850s. Who knows what will be read 50 years from now? But, with the end of the decade just a few months away, it seemed to us at The Millions a good time to pause and take stock, to call your attention to books worthy of it, and perhaps to begin a conversation.As of this writing, they haven't revealed the top two, but numbers 3-20 are there, and it's a good list -- I'm amazed, actually, at how many of them I've read all or part of. There's not a book on there I would fight vociferously against including, even if novels like Gilead aren't really to my taste (though I've used that book in a couple of classes, so I wouldn't say I hate it ... I just don't see what it seems everybody else on Earth sees in Marilynne Robinson'…
Read more 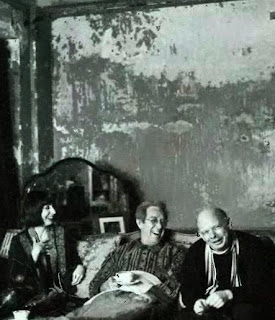 First, obviously, I ate the cake. And then I grabbed some matches which sat nearby me, and I glanced around, and I lit the bit of paper. "I am the designated mourner," I said.

The bit of paper wasn't very big, but it burned rather slowly, because of the cake crumbs. I thought I heard John Donne crying into a handkerchief as he fell through the floor -- plummeting fast through the earth on his way to Hell. He name, once said by so many to be "immortal," would not be remembered, it turned out. The rememberers were gone, except for me, and I was forgetting: forgetting his name, forgetting him, and forgetting all the ones who remembered him.I'm working on an essay for Rain Taxiabout the plays and essays of Wallace Shawn (in my opinion, one of the great writers of our time), and via a link in this profile/interview, I discovered that WNYC produced an uncensored radio version of Shawn's greatest play, The Designated Mourner, in 2002, and that that radio v…
Read more

September 15, 2009
Mario the Epicurean:
What saves Homer, Sade and Rob Zombie, what makes their work seem somehow less virulent to me nowadays than many ostensibly humanist manifestos, is the utter lack of righteousness about their ethical visions. Zombie even mocks populist righteousness in House of 1000 Corpses when Captain Spaulding seems about to fly off the handle in a proto-teabag populist rage at the middle-class kids because they're condescending to his country ways. But he laughs it off—he doesn't torture and kill because it's the "right" thing to do, because his megachurch or his writing-studies-for-social justice class taught him to hate metropolitan elites, he tortures and kills because he likes it, because as with spiders and webs and Milton and poems it's in his nature to do so, and I defy anyone with a shred of indecency left in her not to give a little cheer when Tiny kills the sheriff in The Devil's Rejects. I'm not about to kill anybody—you know, I mora…
Read more

September 15, 2009
A couple weeks ago, Lev Grossman wrote an essay for The Wall Street Journal and I was in a bad mood that day (having choked on all the butt-ends of my days and ways) and so I decided to take issue with Mr. Grossman's representation of literary modernism. I know my pet peeve against people using the term "modernism" in certain ways borders on the irrational and is at best a bit of lit geekery, but so it goes. I certainly didn't expect a lot of notice. But there was a lot of notice, and various people started piling up either to pummel Mr. Grossman's essay or to celebrate it. There was, at least from the perspective of a lit geek like me, some fascinating discussion in amidst the ever-vociferous noise of internet brouhahahahahas.

I know Mr. Grossman considered some of what I said to be too ad hominem, and though I may not feel that it was too ad hominem, he's absolutely right that, out of disappointment that someone of his educational background, broad readi…
Read more

September 13, 2009
Last night I stumbled onto a great program on Boston's public tv station WGBH, "Basic Black", where host Kim McLarin talked for half an hour with Tavis Smiley and Cornel West about life in the Obama era (I was particularly taken with West's suggestion that Obama himself is "reluctant to step into the Age of Obama" and with the discussion of the meaning and implications of the terms "black" and "negro".)  The entire show is available as a streaming video.  (I've only recently discovered my tv gets WGBH, so I'm sure some regular viewers are thinking, "What, Cheney, have you been living under a rock?!"  Until a year ago, I hadn't ever owned a tv, so, well, yes...)

The website includes past shows as video or audio podcasts, and scrolling through the archives, I see lots of programs I'll be looking at soon, because the topics and guest lists are of the sort that are rare on U.S. television: thoughtful conversations w…
Read more

Oh, Library of America, you know I love you. You have parted me and my money more times than I would care to admit. I love you for your Bowles and your Lovecraft and Du Bois and Thoreau and Douglass, your O'Connor and Baldwin, your Ashbery and Crane, your Porter and Powell, your Singer and Singer and Singer, your movie critics and poetries, your civilrights and revolution. I am currently enraptured with your Carver. I am eagerly (too weak a word!) awaiting your Fantastic Tales. And I don't say this to just anyone, but I cherish your Dick.

So dearest Library of America, imagine what I felt when I read these words from an interview with Mr. Daugherty:
I believe there was some talk, years ago, of trying to get a Library of America collection of Don&#…
Read more

A Conversation with Istvan Csicsery-Ronay, Jr.

Rain Taxi has now posted my interview with Istvan Csicsery-Ronay, Jr., wherein I ask him lots of questions about science fiction, the academy, postcolonialism, Marxism, aesthetic criticism vs. other criticisms, and snails.

(Actually, I'm lying. I didn't ask him about snails.)

I first made a note to remember Istvan's name when I encountered his essay "Science Fiction and Empire", which I thought was fascinating and even, dare I say it, scintillating. When I read Adam Roberts's review of his book The Seven Beauties of Science Fiction, I knew I needed to read it. So I did. And then I had questions. Thus, an interview was born...

Here's some of what Istvan has to say about his book:I wanted to do a lot of things writing The Seven Beauties, and they kept changing—which probably shows up in the zig-zag way the book is written. My first and overriding goal was to write something useful and stimulating for students and younger scholars of SF. That meant produci…
Read more

September 03, 2009
Hal Duncan, known to some as The Slayer of Shibboleths, to others as The Scribe of the Book of All Hours, to others as The Notetaker of the Geek Show, and to still others as THE....Sodomite Hal Duncan -- this (super)man is now writing a regular column for Fantasy Book Spot, "Notes from New Sodom".

In his first column, Hal does what many of us have done in our early ventures with such things, he digs into definitions (and thus stakes some ground). This is Hal, though, so what he does is really not much like what any of the rest of us have done. It's longer, for one thing. And full of that inimitable, erudite lyricism, that voice, that essence (spunk!) of Hal.

And with this first column of his, he lets me achieve one of my greatest ambitions in life: to provide an epigraph. An epigraph taken from my second column for Strange Horizons, "The Old Equations", a piece I'd pretty much forgotten I'd written, in which I staked out some ground of my own. My vie…
Read more

contents being processed and analyzed. will then be buried in container meeting criteria specified by section 5838/67 and guarded by sentries.

if word of secret history should be leaked, follow protocol: deny, deny, deny.

monitor this channel for updates.