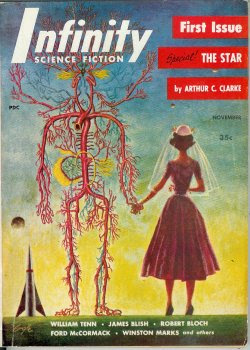 As is being widely reported, Arthur C. Clarke has died. He was a unique and remarkable man, one whose influence and importance was felt in numerous fields.

It's been years since I read any of Clarke's fiction, and it never had the deep effect on me that the writings of some of his contemporaries had, but his novelization

of the movie he helped imagine, 2001: A Space Odyssey, was one of the first SF books I ever tried to read, since it was just about the only SF novel my parents owned when I first got interested in such writing. I saw the movie soon after, and though I found it utterly bewildering and sometimes soporific (I was more used to things like Smokey and the Bandit at the time), it piqued my interest, and later viewings grabbed hold of my imagination in a way few films ever have.

Clarke's passing is one I find particularly notable, though, because it signals the end of an era. I don't know where the term "The Big Three Science Fiction Writers" originated, but since childhood I have thought of Isaac Asimov, Robert Heinlein, and Arthur C. Clarke as those writers. Asimov and Heinlein, of course, started publishing during the "Golden Age" of the late '30s and '40s; Clarke first began publishing professionally after they were well established (Clarke's first stories were "Loophole" and "Rescue Party" in 1946), but eventually was seen as part of the triumvirate. The only SF writers from that era who are still with us, as far as I know (and I could be neglecting someone) are Jack Vance and Frederik Pohl -- immensely important writers, indeed, but it is strange to realize that our living links to science fiction's formative years are now mostly gone.

Ninety years is a great lifespan if they are part of a good life, and it seems that Clarke's life was a good one, so I am not sad at his passing, just ... nostalgic. And grateful to him and to his generation of thinkers and writers, people who imagined the way for later generations' imaginings. It's a strange feeling, to face a new day that elders won't themselves see. Thank you, Sir Arthur, from all of the rest of us carbon-based bipeds!
Arthur C. Clarke Obituaries science fiction