Showing posts from May, 2009
Show all

Outtakes from an Introduction

I've told the story of how I came to write the introductions to the revised editions of Samuel Delany's The Jewel-Hinged Jaw and Starboard Wine (the latter due to be published, last I knew, this fall [update 8/25/09: Now postponed till sometime next year]). The intro for JHJ that appears in the book, though, is very different from the first one I wrote, because from conversations with the editor at Wesleyan University Press, I got the impression that I should write a light, accessible, personal introduction for a general audience, something similar to Neil Gaiman's intro to The Einstein Intersection . No big deal. I had a sort of funny story about first encountering JHJ at much too young an age, so I built the introduction around that. Chip Delany's reply was something to the effect of, "Great intro! Wrong audience!" Oops. (And, he asked, is JHJ really that difficult? No, certainly -- but I do tend to like to be dramatic...) It turned out that C
Read more

The new issue of The Quarterly Conversation has been posted, and, as with every issue, it's full of interesting stuff (of special note is Scott Esposito's big essay on the fiction of Cormac McCarthy , but there's tons of other good material, too, including a consideration of the intersections of fiction and autobiography in the works of Janet Frame , to me one of the essential writers of the 20th century. Oh, and a review of the new translation of Andrei Platonov's The Foundation Pit . Haven't read Platonov? You must!) The piece that has, for the moment, most caught my attention is a review by Geoff Wisner of Rob Spillman's anthology Gods and Soldiers: The Penguin Anthology of Contemporary African Writing . I just got a copy of this book, and have been looking through it eagerly, because I know Spillman (the editor of Tin House ) cares deeply about African literature and has developed real knowledge of it, having spent time on the continent and having w
Read more 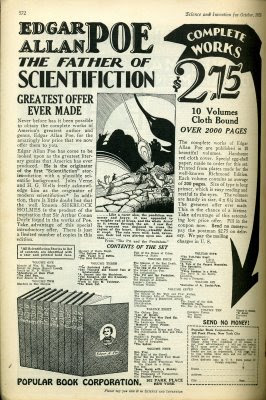 This year is the 200th anniversary of the birth of Edgar Allan Poe (born 19 January 1809) and here in his honor is a scan of an advertisement from the October 1928 issue of Hugo Gernsback's Science and Invention magazine (click on the image to see it full size): (Fun typo: The description calls Poe "the greatest literary genus [ sic ] that America has ever produced".)
Read more

A Conversation with Jedediah Berry 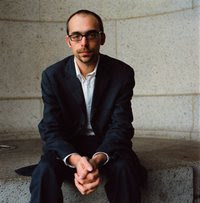 by Geoffrey H. Goodwin (Geoffrey Goodwin was last seen around these here parts when he interviewed Thomas Ligotti . I'm thrilled that he has now returned with an interview with Jedediah Berry, author of The Manual of Detection and of one of my favorite stories of recent years, "Minus, His Heart" (first published by Chicago Review and conveniently reprinted in Best American Fantasy 2008 ). Jed has worked for Conjunctions and Jubilat , and he is currently Wizard-of-Many-Things [my term] at Small Beer Press .) Geoffrey H. Goodwin: You've worked in the field a long time. When did you last have a job outside of books and publishing? Jedediah Berry: My first job out of college was with PEN , the non-profit writers’ organization, and before that I was doing a work study job with the literary journal Conjunctions . I would have to go back to my first year of college, when I was washing dishes and painting curbs yellow. (Laughs.) So it's been a very long
Read more 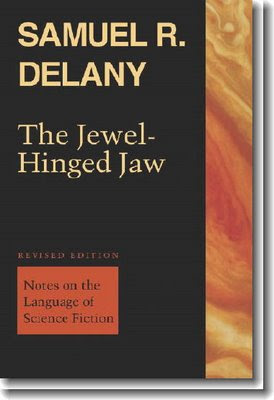 I haven't seen a copy yet, but the new edition of Samuel Delany's The Jewel-Hinged Jaw: Notes on the Language of Science Fiction , for which I wrote the introduction, seems to now be shipping from all of the various online booksellers. Thus, you can buy it from... An independent bookstore near you! Powells! Wesleyan University Press! Amazon.com! Somewhere else! I'll be posting some out-takes from my introduction to the book here within the next week.
Read more

May 20, 2009
According to Inside Higher Ed , Middlebury College has announced that it will pull funding from The New England Review by 2011 "if the publication doesn't become self-supporting." This hits home for me in a few ways -- NER was one of the first lit mags I ever read, because at the time I became interested in such things, the local college library subscribed (and still does). As a teenager, I attended the Bread Loaf Young Writers' Conference , met the managing editor, and got her to sign a copy of the magazine for me (for a while, NER was known as The New England Review & Bread Loaf Quarterly , and I still tend to think of it as NER/BLQ ). Later, I attended the adult version of Bread Loaf , and though NER 's official relationship with the conference was less by then, many of its staff members still attended, as well as numerous writers it had published. NER was also one of the earliest supporters of Best American Fantasy , and I'm thrilled that BA
Read more

I've long been fond of Heather McHugh's poetry, and have even longer been fond of collage-type poems, so I was particularly delighted to read her collage-poem of cyberspeak, "Hackers Can Sidejack Cookies" in a recent issue of The New Yorker : A beige toaster is a maggotbox. A bit bucket is a data sink. Farkled is a synonym for hosed. Flamage is a weenie problem. That's just the first stanza. I was hooked right from there, but once it continued to "In MUD s one acknowledges/ a bonk with an oif./ (There’s a cosmic bonk/oif balance.)" I was totally in thrall -- the sky turning to the color of a screaming live TV wouldn't have kept me from continuing to read. The ending achieves perfection: both hilarious and somehow, strangely, ineffably ... sad. I probably especially enjoyed the poem because I actually understand some of the terminology -- for instance, the title makes perfect sense to me, and the last lines evoke emotion not only because their r
Read more

May 16, 2009
In January of 2008, civil unions for same-sex couples became law in my home state of New Hampshire. This was a wonderful advance for us, and I had friends and close family members who were civilly unified. Now, it looks like we're about to take the next step toward full equality. From Governor Lynch's press release yesterday: This morning, I met with House and Senate leaders, and the sponsors of this legislation, and gave them language that will provide additional protections to religious institutions. This new language will provide the strongest and clearest protections for religious institutions and associations, and for the individuals working with such institutions. It will make clear that they cannot be forced to act in ways that violate their deeply held religious principles. If the legislature passes this language, I will sign the same-sex marriage bill into law. If the legislature doesn’t pass these provisions, I will veto it. We can and must treat both same-sex c
Read more

George Steiner at The New Yorker The front flap of George Steiner at The New Yorker , published as a lovely paperback by New Directions earlier this year, claims that the book "collects fifty-three of his fascinating and wide-ranging essays from the more than one hundred and thirty he has contributed to the magazine." This is an error. The essays are certainly fascinating and wide-ranging, but there are only twenty-eight of them. Perhaps Robert Boyers, the editor, has selected another twenty-five for a later volume. We can certainly hope so. Subscribers to The New Yorker have access to all of Steiner's essays, though the New Yorker's database is not the equal of, for instance, the database available of Harper's subscribers, and so browsing Steiner's contributions is cumbersome without the guide handily provided as an appendix to George Steiner at the New Yorker . I've been reading and grading final papers and exams for the past week, and in amidst that I saved the last ves
Read more

The Pilo Family Circus by Will Elliott

I'm not going to post a picture of the cover of Underland Press's edition of Will Elliott's first novel, The Pilo Family Circus , because it disturbs Justine Larbalestier, and I like Justine and don't want to disturb her. (I actually haven't seen the cover in real life; I read the advance copy, which just has text on it.) Maud Newton offers an efficient and accurate summary of the novel's beginning, and so I am going to steal it outright: Jamie, a timid everyman with an arts degree who works as a concierge at a Brisbane gentleman’s club and has arranged his bedroom with an eye toward impressing a cocktail waitress he’s never had the nerve to ask out, nearly runs into a psychotic clown with his car after getting off a shift one night. Soon his apartment is trashed, his roommate Steve is vomiting blood, the clown and his buddies are constantly dropping in to make threats, and both Jamie and Steve are told they must pass an audition -- by making the clowns l
Read more
More posts