Showing posts from June, 2009
Show all

The City and the City by China Miéville

If The City & The City is not my favorite China Miéville novel, that is only because I encountered Perdido Street Station at exactly the time I was ready for the riches it offered, and so the powerful, unforgettable experience of reading it will forever overshadow the experience of reading anything else Miéville writes. I think Iron Council possesses many virtues Perdido Street Station does not, but the latter is the novel that lives deep in my heart. It would simply be impossible for me to love a China Miéville novel more than Perdido Street unless I didn't think of it as a China Miéville novel. And it is almost possible to think of The City & The City as not a China Miéville novel. For one thing, there are no monsters -- at least not in the sense that we are used to monsters from his previous books. This is a great surprise -- what Miéville fan, after all, doesn't know that he loves creating monsters? For another thing, the writing is lean and straightfor
Read more

June 29, 2009
I hate to admit it right now, but the only Michael Jackson song that ever really appealed to me was "Billie Jean" . I encountered the video many times on the old MTV when I was a kid, and I thought the tiles and steps that lit up underneath Jackson's feet were just about the coolest things I'd ever seen. Amanda Palmer , though, I have adored since I first encountered her as part of the magnificent Dresden Dolls (I shall be forever grateful to Sonya Taafe for suggesting they might appeal to me). Amanda Palmer was in West Hollywood to play a concert the day Michael Jackson died. For a tribute, she quickly put together her own version of "Billie Jean", now available as an audience member's video at YouTube (there are two up there [so far], and I've linked to the one with the sharpest video. I discovered the other one via, of all places, Talking Points Memo , then watched this one). There's about 3 minutes of talking beforehand, then the s
Read more

Rick Bowes on Stonewall at 40 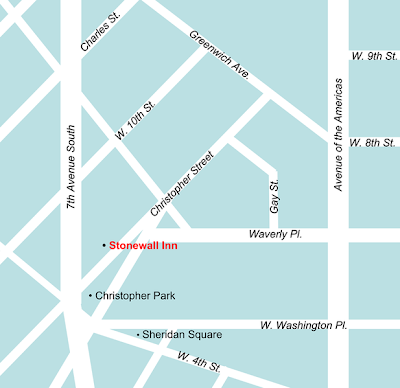 Knowing Rick Bowes is a privilege for many reasons, but one of my favorites is that he is a wonderful historian of New York City. Walking the streets with Rick becomes a magical tour through the wondrous and terrible changes the city has seen over the centuries. Having lived in Manhattan for most of his life, Rick has also sometimes been an eyewitness to history, including the history made in the early hours of June 28, 1969 in Greenwich Village: The Stonewall Riots . Richard Bowes is the author of such books as Minions of the Moon , From the Files of the Time Rangers , and Streetcar Dreams . He has won the World Fantasy Award, the International Horror Guild Award, the Lambda Literary Award, the Million Writers Award, and been nominated for the Nebula Award. He reportedly likes writing but hates being a writer . via Wikimedia Commons In History's Vicinity by Richard Bowes It's odd to be old enough to remember history. The Stonewall Riot always makes me feel like
Read more

Twists of the Tail: The View from a Cat

The resident reviewer of all things feline (and catcher of all things rodent) at Mumpsimus Central is Ms. P. Martha Moog, whose incisive review of Predator vs. Aliens many readers will remember. She recently decided that the recent Wildside Press reissue of Ellen Datlow's Twists Of The Tale: An Anthology of Cat Horror made for good bedtime reading, as you can see: Ms. Moog does caution readers that the stories (from such writers as William S. Burroughs, Stephen King, Joyce Carol Oates, and many others) are sufficiently frightening that it's probably a good idea to do as she did and sleep with a crate of small arms ammunition beside you.
Read more

J.M. Coetzee recently came back from the dead to read from his new book (link via Maud ) : Seeing Coetzee read on Thursday night thus presented a spectacle to make any postmodern literary critic lick their chops: an almost pathologically private man reading his own "fictionalised memoir", with Summertime achieving a further distancing effect by means of the fact that the book takes the form of a series of interviews with people from Coetzee’s life carried out after Coetzee’s death. Coetzee fans will remember that in the previous books in the trilogy, Boyhood and Youth , the young John Coetzee discovered a radioactive meteor in provincial South Africa and soon after began experiencing the distancing of signs from their signifiers. In search of signifiers less free-floating, he set out across the wilds of the veld and had many interesting encounters with metaphysical conceits that both tormented him and provided balm to his increasingly abjected soul. By the end of the sec
Read more

I didn't intend to disappear from this blog for quite as long as I did, but I got busy with work on the manuscript of Best American Fantasy 3 (the contents of which we'll finally be able to announce next week!) and I've been teaching an online course for Plymouth State University, an interesting experience, since I've never taught classes entirely online before (nor am I all that sure it's a way I like teaching, but that's another story...) I probably owe you an email.* Readercon is coming up -- July 9-12. I'll be there Friday afternoon and most of Saturday. The great and glorious Liz Hand and Greer Gilman are guests of honor. The other guests ain't too shabby neither. Except for that Cheney guy. He's a putz. Some things I've noticed out on the internets: Hal Duncan wrote a little post at his blog about ethics, reviewing, criticism, etc. A few people commented. Hal wrote another little post responding in particular to comments by A
Read more 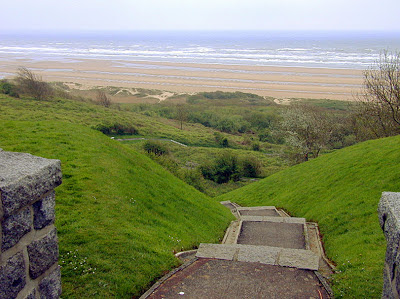 Omaha Beach photo: Anthony Atkielski, Wikimedia Commons I graduated from high school in 1994, and my father's graduation present to me was a trip to Normandy for the 50th anniversary of D-Day . It was as much a present to himself as to me -- he was the one who was obsessed with World War II, the one who would enjoy all the various military museums we would see over the two-and-a-half week tour. I wouldn't say I was thrilled, at 17 years old, at the prospect of the trip, but I recognized it was a once-in-a-lifetime opportunity, and there would be some free days in London, a city I'd been to once before, and Paris, a city I had never seen, so I went along with the idea. We began in London, which, it seemed to me then, was likely to be the highlight of the trip, because I got to see excellent productions of Sweeney Todd and Oleanna (the latter directed by Harold Pinter), go to bookstores, and indulge my love of cities. But it wasn't until we took a ferry across
Read more

June 04, 2009
Because of what is called, I believe, in technical jargon "bureaucratic wrangling", it took a little bit longer than expected -- but yesterday the governor of New Hampshire, John Lynch, finally signed into law a bill allowing same-sex marriage . This has a direct effect on the lives of some of my family and friends, so it was pretty big news. That the state went for the idea does not surprise me too much -- we're notoriously conservative economically up here, but socially relatively liberal -- but Lynch's support is a surprise, even if it took a lot to get him there. The added language providing super-duper-double-extra-gay-proof-yay-for-God protection against churches having to perform same-sex weddings is mostly window dressing to mollify people who think their churches are suddenly going to be overrun with people they hate ( Gene Robinson will be comin to yer cathedral, spreadin teh gay on yer altar!), but as the commenters at John Scalzi's blog (and elsew
Read more

Up the Walls of the World by James Tiptree, Jr.

Much of reading, particularly fiction, is a matter of faith -- ye olde "willing suspension of disbelief". Science fiction, when it is more than an adventure story outfitted with spaceships and Bug-Eyed Monsters, often requires a more specific type of suspension of disbelief, a type that can create a paradox: fiction that is markedly more imaginative than most suffers from a failure of imagination. This failure occurs when the reader focuses on the story's extrapolations, but decides that they are incomplete, or simplistic, or ridiculous. If the reader perceived the story as surrealist fantasy, this wouldn't be a problem, and might even be a virtue. If the reader didn't place much emphasis (in terms of having faith in the imagined circumstances of the story) on the story's probabilities and extrapolations, then the problem would be, at best, minor (thus, stories about alien canals on Mars are perfectly readable if we haven't invested our willingness to
Read more
More posts