Showing posts from December, 2007
Show all

December 24, 2007
For various reasons, I'm going to need to take a hiatus from blogging for a bit. I do promise to return. WIRK NICHT VORAUS, sende nicht aus, steh herein: durchgründet vom Nichts, ledig allen Gebets, feinfügig, nach der Vor-Schrift, unüberholbar, nehm ich dich auf, statt aller Ruhe. DO NOT WORK AHEAD, do not send out, stand inward: transgrounded by the void, free of all prayer, fine-fugued, according to the pre-script, unpassable, I take you in, instead of stillness. --Paul Celan trans. Pierre Joris from Lichtzwang / Lightduress
Read more 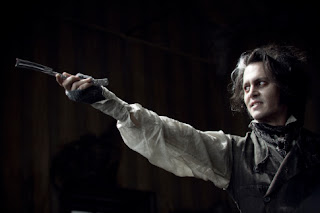 I know Terry Teachout reveres the stage version of Sweeney Todd: The Demon Barber of Fleet Street at least as much as I do, but I can't entirely agree with him that Tim Burton's film version "is -- without exception, and by a considerable margin -- the best film ever to have been made from a Broadway musical." However, this is only because I think Bob Fosse's Cabaret is a more profound and innovative film. Fosse turned an awkward and mediocre musical into something newly rich and strange, and the camera work and editing in Cabaret remain breathtaking even after thirty-five years and oodles of CGI movies. Tim Burton simply had the task of not obscuring the brilliance of his source material. That he did more than that is something to be celebrated. Burton has created what is certainly his best film in many years, and perhaps his best film yet, although opinions on that will depend on how much you prefer Burton's darker side to his goofier side. This S
Read more

Thanks to this post , this site has become the top hit on Google for such phrases as "I will have vengeance!" and "I will have vengeance, I will have salvation!" And lots of hits a day are coming through because of it. I don't know if people are looking for ways to get vengeance and salvation, or if they're looking for the song the phrase came from in Sweeney Todd . If it's the latter, that's easy: The song is "Epiphany" and the lyrics, wiht a fwe typoz, are available here . You can see it on YouTube in various productions: Len Cariou (the original Sweeney) and Angela Lansbury ( the original soundtrack album is a masterpiece, like a bloody and brilliant radio show); George Hearn and Angela Lansbury ; George Hearn and Patti LuPone ; a little bit of Johnny Depp . For actual vengeance and salvation, let me introduce you to my friend Nick Mamatas , who will be happy to help, I'm sure...
Read more

A Question for the Audience

December 17, 2007
I had parent-teacher conferences the other day, and the most common statement-then-question from parents was, "My child doesn't really like to read, and I don't know how to turn him/her/it onto the pleasures of reading. What can I do?" My stock response was, "If I had an easy answer to that, I'd be a millionaire." I didn't want to say that I think most of the time we English teachers are an impediment to students' enjoyment of books (though I do think I slipped and said that to one parent), and that suggesting to an adolescent that anything is good for them is the surest way to make them avoid it at all costs. I didn't want to tell them, either, how little I feel like I understand adolescents anymore, how far I am from their frames of mind, how much they seem to have changed (or I have changed, or not changed enough) since I began teaching ten years ago. Many of the parents who said, despairingly, that their child doesn't like to rea
Read more

December 17, 2007
Over at Strange Horizons, the reviews department is devoted to the work of Samuel R. Delany this week, and it begins with my essay "Night and Day: The Place of Equinox in Samuel R. Delany's Oeuvre" , which is a piece I cobbled together from various fragments of academic writing. It originally had footnotes, much more jargon, etc., and then Niall Harrison did a heroic job of editing it, and I went back and rewrote various parts, to turn it into what it is now. (Some clunkiness still remains, because I decided that preserving a couple of ideas was more important than giving readers smooth transitions, so I hope you'll forgive me.) The whole process produced my favorite editorial suggestion of all time, at least among editorial suggestions I've received: "Maybe better to omit the next two paragraphs and skip straight to the sex?" Keep your eyes on Strange Horizons this week, as Graham Sleight will be writing about Delany's short fiction, L. Tim
Read more

The Farther Shore by Matthew Eck

December 15, 2007
The Farther Shore is the current LitBlog Co-op pick, and reading it caused me to think about a few different things, given that the novel portrays American soldiers in East Africa. It was, in fact, exactly a year ago that I was a tourist in Kenya , only a few hundred miles away from Somalia, where Matthew Eck had fought for the U.S. Army in the 1990s. A few hundred miles, a decade of years, entirely different worlds. (The U.S. has had a long history in Somalia , with U.S. military operations continuing , though this time as part of operations against al-Qaeda, while the situation remains complex and difficult .) Before reading The Farther Shore , I wondered about why it needed to be a novel -- why, in these memoir-sodden days of ours, would a writer choose fiction when he could probably have gotten more money and notice by writing about his own experiences? I became a bit skeptical of the fiction, because there were many possible pits it could fall into: politics and polemics ov
Read more

"The detritus of the white man's world"

December 12, 2007
I've spoken of my admiration for much of Doris Lessing's work , but I have remained silent on her writings about Africa and her thoughts on that, the continent of her birth. Mostly because I've felt that her perspective on Africa was an important one for a while, but that she is also very much a product of her time and situation, as are we all. I liked parts of her Nobel lecture very much, and the overall thrust of it -- which I perceived as a call to recognize the systems and luxuries that allow literature to be written -- is one I think deserves to be raised more often, and I was glad Lessing did. I didn't even mind her disparaging comments about the internet, because I never expected her to be very familiar or approving of it, anyway. But some of what she writes about Africa bothered me quite a lot, in that she seems to be nostalgic for colonialism. Ramblings of an African Geek now has a post addressing this : Never mind the damage colonization has done and sti
Read more

December 12, 2007
Pindeldyboz is migrating from being a print-and-online magazine to being only an online magazine, and so they held a party Monday night, and I went. So did other people. Including Richard Larson , Dustin Kurtz , Ed Champion , and Sarah Weinman . The last print issue of Pboz is actually only appearing as a free PDF download . It's 16 megabytes of worthwhile reading. Of last night's readings from the last issue, I was particularly taken by two. Here are excerpts: As internships go—is that still what this is? -- you could do a lot better than zig-zagging through no man’s land carving up no man’s cows all summer. It’s not for credit, what the hell kind of major would give you credit for that? It’s more like an apprenticeship, but with no hope or desire to take over the business. Every Wednesday $250 is direct-deposited into my account back east. This job makes a lot more sense on Wednesdays. --from "Every Creeping Thing of the Earth" by Patrick Rappa I agreed
Read more

December 09, 2007
One of the more venerable online literary magazines, Failbetter.com , has now reached a milestone: its twenty-fifth issue. Published quarterly since the fall of 2000 (when, coincidentally, one of the other venerable online magazines, Strange Horizons , also began), Failbetter has been a model of what can be accomplished on the web. They've consistently offered interesting fiction, poetry, art, and interviews -- indeed, their very first interview was with pre-Pulitzer Michael Chabon , and they would go on to interview a number of other authors only a few months or even weeks before they, too, would be bestowed with prizes. Of course, the web has changed a lot since 2000, and Failbetter has changed too. Now they've got an RSS feed and are releasing content every week rather than just four times a year. The quality is still high, though, and the diversity of content exciting. I can't claim impartiality -- one of my first publications of fiction as an adult came with &q
Read more

John Klima is having everyone who contributed to his anthology Logorrhea write up a little something about why they chose the Spelling Bee word they did, and then post the section of Jeff VanderMeer's all-encompassing "Appogiatura" story that corresponds with the word. Also, there is a podcast of each section of "Appogiatura" . And John is going to chronicle it all via this blog post . First, about my own word and story... Elegiacal Origins of "The Last Elegy" It was the only possible word for me. What stories have I written that couldn't, in some way or another, be described as elegiacal ? Sorrow for the past -- that is, it seems, one of the few things my imagination is willing to fixate on for fictional ideas. Often, too, the novels and stories that most appeal to me as a reader are ones with at least a hint of the elegiacal in them, partly because memory and time fascinate me with their twinned ability to haunt us with the ghosts of a
Read more

Things are going to continue to be light around here for at least a month, as I have various duties to attend to, deadlines that are quickly threatening to pass, etc. And last night I decided that I needed to start the Big Project over yet again, despite progress, because it's obviously in the wrong POV and starting far too far from the stuff that matters. And I owe 13,593 people 642,482 emails. And only a few of them are princes in Nigeria who want me to take care of their money for a few days. And I've been sick, which is never fun, though I have reached the post-sickness point of being just utterly weary. (I perplex my students repeatedly because they have all been indoctrinated into believing that sentences cannot begin with such words as "and" or "but", that paragraphs cannot have more than five sentences in them, that sentences with more than a certain number of words in them are run-ons, etc. I tell them this is not true. I tell them what matte
Read more
More posts