Showing posts from September, 2011
Show all

In Praise of the Thesaurus 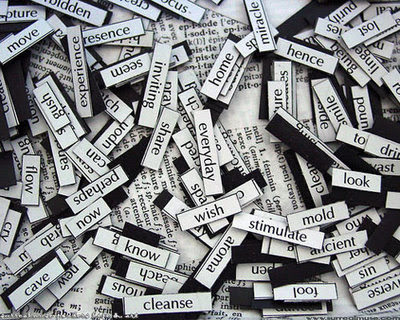 Hearing the news that the latest issue of the Writer's Chronicle contains a statement from poet Mark Doty that, "If you write a poem with the aid of a thesaurus, you will almost inevitably look like a person wearing clothing chosen by someone else. I am not sure that a poet should even own one of the damn things," I was aghast. Aghast, I say! Astounded! Appalled! I have said before that my favorite reference book is a 1946 edition of Roget's International Thesaurus , and that remains true. I covet the Historical Thesaurus of the Oxford English Dictionary  and continue to dream at night of figuring out a way to convince the good people at Oxford University Press to send me a copy (other than to pay them $500). (I do have The Oxford American Writer's Thesaurus , which is a delight. It includes a fun foreword by Rick Moody in which he notes that Donald Barthelme used a thesaurus, which should be enough to cause you to make sure you are never without one yo
Read more

September 27, 2011
Last month I wrote about Joseph Epstein's hilariously grumbly screed against The Cambridge History of the American Novel , and now at Slate the editor of that volume writes a temperate, rational, and utterly ungrumbly response . I particularly liked this paragraph: Simply recording our appreciation for the "high truth quotient" (the measure Epstein wants) of a stream of canonical novels won't do. It's not clear what that "quotient" is for Epstein, but anything that smacks of pop culture is by definition excluded. Yet novels were and remain a vital part of popular culture, and their emergence in the 18th and 19th centuries was greeted as an affront to the "centurions of high culture" who appointed themselves to guard the gates before Epstein nominated himself for the job. Only a tiny fraction of the hundreds of thousands of American novels published ever achieved—or even aspired to—the exalted status of high art.
Read more

Telluride at Dartmouth: We Need to Talk About Kevin

This post continues to chronicle my attendance at the Telluride at Dartmouth program at the Hopkins Center for the Arts. Days 1 & 2 can be found here. Lynne Ramsay is a director of exceptional visual and aural skill, as anyone who has seen her films Ratcatcher  and Morvern Callar  can attest. I adored Ratcatcher  and found Morvern Caller  rather a bore, which seems to be a somewhat idiosyncratic view, as lots of people who saw both loved the second film even more than they did the first. What we can all agree on, though, is that a new Lynne Ramsay movie is a cause for celebration. And when that new movie stars just about my favorite living film actor, Tilda Swinton , it becomes for me a great event. I have not read the acclaimed novel by Lionel Shriver that We Need to Talk About Kevin  is based on, and I was just about to read it when I heard about the film, so I decided to wait. I have seldom wished I had read a book before seeing a movie based on it, and so whenever p
Read more 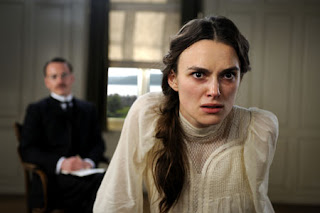 A Dangerous Method Dartmouth College has a long-standing relationship with the Telluride Film Festival, and every year a group of films that premiered at Telluride are shown as part of the Telluride at Dartmouth  program, a highlight of any northern New England cinephile's year. (It was at Telluride at Dartmouth last year that I saw Never Let Me Go .) This year, I've decided to try to see as many of the films as I can, and unless exhaustion wears me down, I expect to see five of the six. (Unfortunately, The Kid with the Bike , the new movie from the Dardenne brothers , is playing on a day when I have a prior commitment.) I won't do in depth reports on the films here, I don't think, because of a lack of time, but I do want to record initial impressions. The first film shown was  A Dangerous Method , David Cronenberg's best comedy since Crash . Most people probably wouldn't classify A Dangerous Method  as a comedy, and it's certainly not being sold
Read more

The Revelator is Now Revealed! 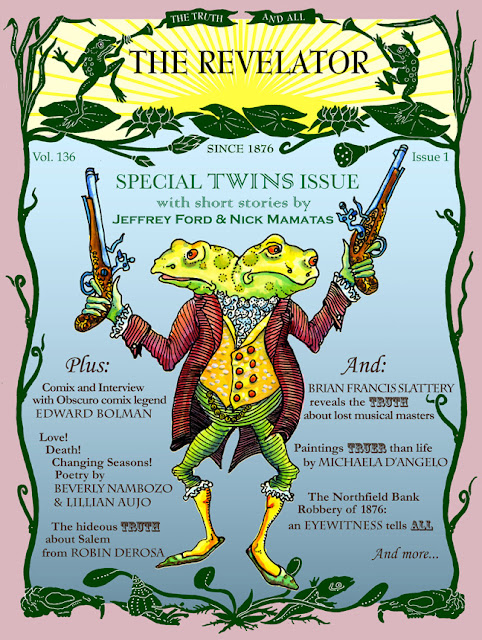 Eric Schaller and I have been working on creating an online version of a magazine some of our ancestors  were involved with in 1876, and after a long period of work, with the brilliant and invaluable help of Luís Rodrigues, THE REVELATOR can now be revealed. In it you will find two new short stories, "Gaslight" by Jeffrey Ford and "Nick Kaufmann, Last of the Red-Hot Superwhores" by Nick Mamatas; an essay about the relationship between Salem, Massachusetts and witches by Robin DeRosa, poetry by Lillian Aujo and Beverly Nambozo, an interview with and comix by Edward Bolman, an account of The Spleen Brothers by Brian Francis Slattery, paintings by Michaela D'Angelo, and an eyewitness account of the James/Younger gang's raid on the bank in Northfield, Minnesota -- an account unlike any others, and till now lost in the archives of The Revelator ! A theme of twins, doubles, and doppelgangers runs lightly through this issue of the magazine. It's presen
Read more

September 21, 2011
My writing at this here blog has fallen off significantly since classes started, because I'm teaching six days a week (university classes during the week, a high school class in epistemology on Saturdays), and so my current schedule consists of prepping for classes, teaching classes, and then whatever errands, etc. I can fit into the occasional free minutes. But still the internet provides interesting stuff, regardless of how much I am paying attention to it! Imagine that! For instance, here's an advertisement from a 1968 issue of Galaxy  that reveals which science fiction writers were in favor of the Vietnam War and which ones were not . I've seen the ad before (I have some Galaxy  issues from 1968) but never paid much attention to it, really, until just now I noticed something odd. On the list of writers who declared themselves in favor of remaining in Vietnam in 1968, there are very few whose writing I have much interest in -- R.A. Lafferty and Jack Vance are
Read more 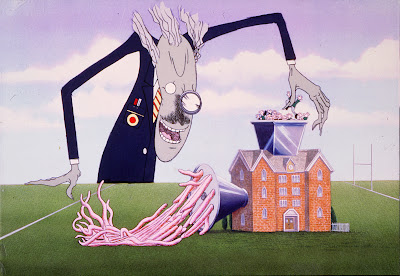 I haven't done my usual blogging about teaching yet this term, mostly because I spent so much time trying to put a couple of new classes together that the idea of writing about it all wasn't very appealing. But now the classes are up and running, and so I can at least share some syllabi and thoughts with those of you who are curious. The classes, with links to their syllabi, are: Writing and the Creative Process (a general education, "intro to creative writing" sort of class) Currents in Global Literature (a required course for English majors) Media and Popular Culture (an upper-level Communications & Media Studies class)
Read more

Just Be Glad You're Not Trying to Sell a Poetry Book

September 07, 2011
I was working on a post about the BlazeVOX asking-writers-to-help-subsidize-poetry-publishing brouhaha , and its connections to the criminal idiocies of so much academic publishing, and what the idea of "legitimacy" in publishing does for us as writers and readers, but the post got long and banal and so boring that I started falling asleep while I wrote it, which is a bad sign, so I abandoned it, but I've still been keeping one eye on the discussion. Today's post of note is from the blog of No Tell Books , a small, respected indie press: No Tell Books' best selling title broke even after three years and is now earning a very modest profit. This is by an author whose work has appeared in places like Poetry and Best American Poetry . This title has been taught at universities. How many copies does one have to sell to be the best selling title at No Tell Books after four years? 228 . That is not a typo. This number doesn't include what the author has sold h
Read more

World on a Wire 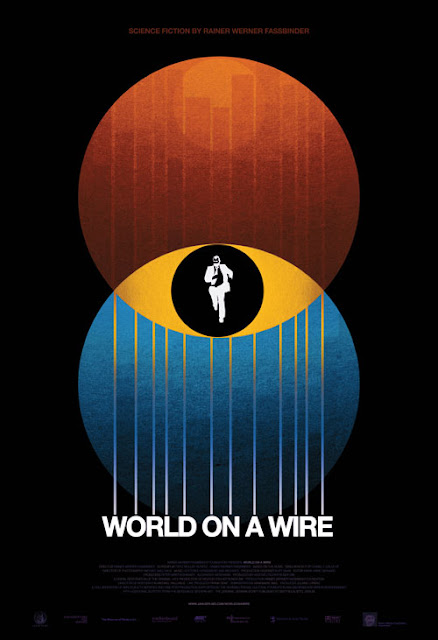 My latest column is up at Strange Horizons , and this time it's about Rainer Werner Fassbinder's epic science fiction film World on a Wire (Welt am Draht) . If you want to see World on a Wire  (and you should!), it's available on home video in the U.K. and Europe , and in the U.S. can be seen via Hulu if you subscribe to Hulu Plus  (you can get a free trial subscription for a week, or if you have .edu email address, for a month). Rumor has it that Criterion will be releasing the film on DVD and Blu-ray in the U.S. at the end of this year or the beginning of next [ update:  the rumors were true ]. It's also still touring various U.S. cities -- at the end of this week, it will be at the Harvard Film Archive in Cambridge, MA. I'm a Fassbinder nut, so will passionately defend even his films that only lunatics defend, but you don't have to be as obsessed with Fassbinder as I to see get pleasure from  World on a Wire.  (Although if "efficient" pl
Read more

September 02, 2011
The preconception, on the part of critics and actors alike, regarding cinematic theatricality as a marker of feeling—a prejudice in favor of one particular school and method of acting—remains as much an obstacle to creation as to appreciation. —Richard Brody
Read more
More posts