Showing posts from February, 2007
Show all

"Our Wonder, Our Terror Remains"

February 21, 2007
From "The Sea and the Mirror" by W.H. Auden , 100 years old today: O what authority gives Existence its surprise? Science is happy to answer That the ghosts who haunt our lives Are handy with mirrors and wire, That song and sugar and fire, Courage and come-hither eyes Have a genius for taking pains. But how does one think up a habit? Our wonder, our terror remains. Art opens the fishiest eye To the Flesh and the Devil who heat The Chamber of Temptation Where heroes roar and die. We are wet with sympathy now; Thanks for the evening; but how Shall we satisfy when we meet, Between Shall-I and I-Will, The lion's mouth whose hunger No metaphors can fill? Well, who in his own backyard Has not opened his heart to the smiling Secret he cannot quote? Which goes to show that the Bard Was sober when he wrote That this world of fact we love Is unsubstantial stuff: All the rest is silence On the other side of the wall; And the silence ripeness, And the ripeness all.
Read more

After watching the film of Children of Men *, I didn't go back to P.D. James's originating novel , which I've never read, but farther back, to Brian Aldiss's Greybeard , first published in 1964, a novel I last read somewhere between ten and fifteen years ago. I went back to Greybeard because other than remembering that it is about a future Earth where humans are infertile, I had no memory of its incidents or characters, only a vague recollection of the book's tone and affect, which I remembered as being like a soft, pastoral requiem -- immensely lyrical, unbearably and unrelievedly sad. That is somewhat accurate -- it is a sad book, indeed -- but it's not as lushly lyrical as I remembered, not as devoid of incident, not as rich, and not as bleak. Worst of all, I remembered a tragic ending, which is inaccurate. The ending is not one that is full of hope or affirmation, but it's hardly King Lear . (Would I have preferred it to be more tragic? No. More
Read more 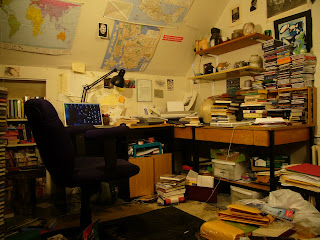 A few people have linked to this Guardian article about various famous writers' rooms. I looked at them all and thought, "Wow, those are clean! How do they work there?!" I have trouble working in an uncluttered space. Chaos comforts me. I know that just about anything I need is probably buried in a pile somewhere around me. I'm good with piles. I understand their logic. At least twice a year I make an effort to organize things. Or at least organize the chaos a bit more. It usually lasts a couple days, maybe a week. I enjoy the order, but am seldom productive in it. There's something threatening within such clarity. Each to their own. My work room is particularly cluttered at the moment, so I took a couple pictures: Perhaps the Guardian article will encourage other people to post pictures of where they write, and perhaps a few of those people will be as fond of clutter as I...
Read more

February 15, 2007
The latest SF Site has been posted, and it includes various reviews, articles, an interview with Ken MacLeod , and my review of John Crowley's new collection of essays .
Read more

February 14, 2007
Weird Tales magazine today announced that the great and glorious Ann VanderMeer will be taking over as editor, starting with the October 2007 issue. I'm excited by this news for a variety of reasons, not the least of which is that Weird Tales has, in various incarnations, been an important part of the fantasy and horror genre since 1923. It not only served as a home for stories by many of the prominent pulp writers (and is particularly noted for its connection to Robert E. Howard and H.P. Lovecraft, among others), but also published Tennessee Williams's first story, "The Vengeance of Nitocris". (Hardly Williams's finest hour, but he was just a kid, and it's a fun bit of trivia.) In 1988, WT was reincarnated under the editorship of John Betancourt, Darrel Schweitzer, and George Scithers, and when I was first falling under the spell of weird fiction of all sorts, I would make occasional pilgrimages to Boston to the Avenue Victor Hugo bookstore, where I di
Read more

From "The English Language in the Age of Shakespeare" by Charles Barber, from The New Pelican Guide to English Literature, vol. 2 : The standard literary language in England offered considerable variety of choice to its user, more than in later ages. It was above all the grammarians and lexicographers and schoolmasters of the eighteenth century, with their passion for regulation and propriety, who narrowed the choices available; on the grounds of "reason" or classical precedent they rejected such things as double negatives and split infinitives, and many of their prescriptions are influential even today. In Shakespeare's day there was more freedom of choice: often a writer could choose from two constructions where now there is only one; he felt free to coin new words, and to develop the meanings of existing ones; the whole linguistic situation encouraged an adventurous and creative attitude to language.
Read more

February 14, 2007
It always happens -- I write a post like the last one saying my schedule is a bit clearer and I ought to be able to get better about keeping things updated here, and then bang , life intrudes and I remember all the deadlines I'd been repressing the memory of, and the blog lies dormant again. The best intentions.... I'll make up for it at some point, but things are likely to continue to be slow here for a little bit. I've been thinking recently about the nature of blogging, this weblog, my life, etc., because a little voice (one of many) in the back of my head keeps asking, "Why do you still do this?!" When I began back in August 2003, I didn't really have another outlet for ideas and thoughts and random musings. Oh, occasionally something would get published here or there, but not much. I kept a journal off and on, but never with much fervor. And then I started reading weird fiction of all sorts again and wanted to talk with other people about it and ch
Read more

This blog has been more sporadic and had less content in the past couple months than I would like, but life got suddenly very busy in a bunch of different ways, and I'm still playing catch-up. But some stuff is winding down, and I'm hoping to be able to make things a bit more consistent and varied around here within the next month or so. In the meantime, here are some almost-random fragments of whateverness... It's Wizard of the Crow Week over at the LitBlog Co-op . Most, if not all, of my blogging this week will be over there. We've already posted the first part of a roundtable discussion, and we'll have more parts going up later, as well as some contests for people to win copies of the book, a podcast interview with Ngugi, and various other fun things. We're putting the finishing touches on Best American Fantasy and have put out a call for submissions and recommendations for the second volume . The book is currently available for pre-order from Amazon
Read more
More posts