Showing posts from August, 2008
Show all

Brand Upon the Brain! 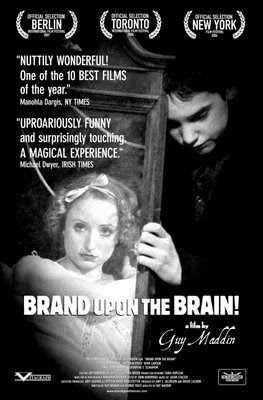 The Criterion Collection DVD of Guy Maddin 's 2006 film Brand Upon the Brain ! (trailer here ) has just been released, and one of the special features is a documentary in which Maddin says his movie (which includes an island orphanage in a lighthouse where a mad scientist concocts a grotesque experiment, people communicate telepathically via souped-up phonographs, and a gender-bending girl-boy detective right out of Nancy Drew and The Hardy Boys inadvertently [or not] creates a triangle of young love) is "97% true". At first, I laughed. "Oh, that Guy Maddin, he's a joker!" But when I watched some scenes again after watching the interview, I saw what he meant, and it reminded me of things I've done myself, and things I have discovered other writers and artists to have done. Maddin says that he has often not responded in emotionally appropriate ways to certain events in his life, and he knew either at the time or soon after that he had not had the
Read more

August 27, 2008
Judith Sargent Murray, "On the Equality of the Sexes" , 1790: Yes, ye lordly, ye haughty sex, our souls are by nature equal to yours; the same breath of God animates, enlivens, and invigorates us; and that we are not fallen lower than yourselves, let those witness who have greatly towered above the various discouragements by which they have been so heavily oppressed; and though I am unacquainted with the list of celebrated characters on either side, yet from the observations I have made in the contracted circle in which I have moved, I dare confidently believe, that from the commencement of time to the present day, there hath been as many females, as males, who, by the mere force of natural powers, have merited the crown of applause; who, thus unassisted , have seized the wreath of fame. I know there are who assert, that as the animal power of the one sex are superiour, of course their mental faculties also must be stronger; thus attributing strength of mind to the transien
Read more 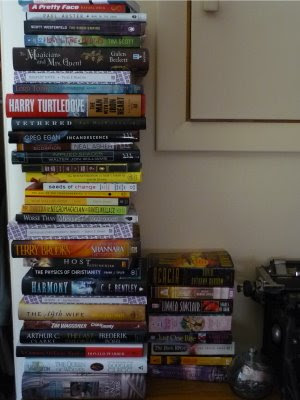 I've never given much of a sense here of the books that arrive at Mumpsimus Central each day. Here, then, are some photos of most of the books that have been sent to us in the past two weeks (the only ones I know for sure are missing are advance copies of Thomas M. Disch's The Wall of America and Holly Phillips's The Engine's Child , both of which I immediately put on the to-be-read pile -- though if I'm responsible to my other duties, I won't start reading either till the late fall. But being responsible is so dull!) Some closer looks... Paul Auster and Peter LaSalle ! Night Shade Books continues to publish a wonderful variety of books with beautiful covers. Two books with great titles: The Age of the Conglomerates and The Defenestration of Bob T. Hash III . An anthology , a novel , and a short story collection And, finally, The Horror Stories of Robert E. Howard and Adam Golaski's Worse Than Myself .
Read more 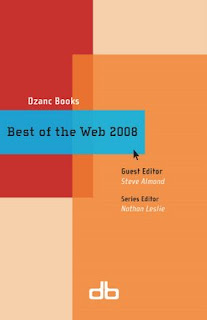 Dzanc Books is publishing Best of the Web 2008 , and because 1.) I think it's a great idea for a book and 2.) there are few things I wouldn't do for Dan Wickett and his Emerging Writers Network , I agreed to host one of the writers included in the anthology as a guest blogger here. (Other websites are doing the same thing , and I will post a link if Dan or anybody else creates a post with links out to them all -- and here's a collection of links to the others .) The guest blogger here at The Mumpsimus is Myfanwy Collins , whose "The Daughters" is included in the book. Dan selected The Mumpsimus as the place that Myfanwy would visit because we are both New Hampshire writers, a distinction that truly makes us members of an elite. (" Elite ? Oh, so that's what you're calling it these days, Cheney..." Dear readers, please allow me my delusions.) The items below were, I believe, intended to be separate blog posts, but I'm not going to
Read more

In Which Dreams Get Political

I love the unconscious brain! Yesterday I went to the university library and took out a bunch of books, including The Arrival , which is very impressive visually and conceptually (I'd only looked at it -- "read" seems the wrong verb for a wordless book -- once in a bookstore, and wanted the chance to really stare; also, the director of the library, David Beronä , reviewed it for Rain Taxi , so I thought it would be fun to borrow it from David's library. He was a very appropriate reviewer for it, since he's the author of Wordless Books: The Original Graphic Novels ) and The Jameson Reader (what I really wanted was Marxism and Form , but the library doesn't have that [gasp! ack!], so I was hoping to be able to trace some of the ideas I was trying to trace via the selection from Jameson 's other writings). So anyway, I looked at The Arrival , then read some Jameson, then read the Times article about Rachel Maddow getting her own show. I haven't ac
Read more

August 18, 2008
On August 18, 2003, I wrote the first post of this blog, a definition of the word "mumpsimus" . The next day, I posted some ideas about what I thought would be appearing here. Then another post, some thoughts on a story by James Patrick Kelly. Five years later, the blog has lived longer than I ever expected it to, been read by far more people than I ever imagined possible, and the posts have had far more range and variety than I thought they would when I was guessing what might pop up in what I then called, with more accuracy than I could know, "this mad universe". Five years doesn't sound like much time, and yet look at how much has changed! When I began The Mumpsimus, the blogs I had read were all personal or political. There were plenty of sites about science fiction and fantasy, but I didn't know of anyone using a blog to write primarily about SF, and so I thought I would give it a try. I had only recently begun reading SF again after shruggin
Read more

August 17, 2008
From a review of Arthur Bentley's Linguistic Analysis of Mathematics in the April 1936-June 1938 issue of Language , as quoted by Mark Liberman at Language Log (in a post that ends with Ursula LeGuin and Cordwainer Smith): When Weiss speaks of 'language' he means exactly what he says, the language which is studied by linguists, the noise you make with your face.
Read more

Life here at Mumpsimus Central continues on apace, despite the slow pace of posting. I finally got done all that I needed to do for Best American Fantasy 2008 and so now can begin trying to get organized for the next volume. I finished acting in a production of Taming of the Shrew that was fun and successful, and I enjoyed the irony of that being the show I appear in before teaching an introductory course in feminism this fall at Plymouth State (in The Riverside Shakespeare , Anne Barton makes the strongest case I've read for the play's subversive elements, but I'm still not really convinced). And I'm slowly getting organized with all of the tasks I have here at the house, though this has not been helped by the phone line getting hit by lightning, the lawn mower needing major service, etc. In terms of reading, I've mostly been trying to prepare for my classes, sifting through gazillions (yes, that's a technical term) of essays and articles in search of on
Read more

Lists and the Listless

Oh, if we denizens of the internets don't love us some lists! Me too, me too! I used to make lists of best this-that-and-another-thing -- best 3 home appliances I have used in my life (the pink feather duster always tops the list!), best 673 songs to listen to while shoveling gravel, etc. -- but there was something terribly authoritarian about it all, and the rabidly anti-authoritarian part of myself screamed back at the little tin dictator in my soul that such list-making is nothing more than a goofy manifestation of a fascist impulse. (The rabidly anti-authoritarian part of my soul uses the word "fascist" without much precision, alas. The more moderate anti-authoritarian part of my soul has read both Fascism: A Very Short Introduction and The Anatomy of Fascism and even the Wikipedia entry , so would never think of applying the term to such an innocuous little hobby as list-making.) The lists I like these days are of the personal kind -- the books that, for whate
Read more

I thought my next Strange Horizons column was going live next week, so I didn't notice when "Ordinary Zhang" was published earlier this week. But it was! The thesis of the column echoes some ideas I first brought up in my review of Paolo Bacigalupi's collection, but my primary purpose in writing it was simply to get people to read or reread Maureen McHugh's magnificent China Mountain Zhang .
Read more

August 06, 2008
It took a few recommendations (including Kelley Eskridge mentioning it and Abigail Nussbaum writing a comprehensive review ), but I recently watched all 18 episodes of the Canadian TV series Slings & Arrows , a smart and tremendously entertaining show about a theatre festival very similar to the Stratford Festival , where many of the actors in the series have appeared. Stratford is a place of magic for me -- I have only been there once, in the mid-90s, but it was among the greatest theatre experiences of my life. Or, rather, two productions were among the greatest theatre experiences of my life: productions of Amadeus and The Merry Wives of Windsor (we also saw Macbeth and The Gondoliers -- the former was, I thought then and expect I would think now, dull and awful; the latter was well done, but it's not among my favorite Gilbert & Sullivan shows, so while I appreciated it, I didn't feel much passion for it). I have long lost the program from that summer, but tw
Read more

August 05, 2008
Just as I was getting ready to get the blog back to full steam, I got cast in a production of Taming of the Shrew (playing Hortensio), and that has eaten up most of my time and energy for the past two weeks. But we opened this afternoon, and it went well, and now I should be able to stop spending all my free time learning lines and rehearsing and get back to reading and writing... (And responding to email -- apologies to everyone I owe notes to...) Meanwhile, here are some good things for your ears: 1.) Kelley Eskridge on the Reality Break Podcast . Since becoming familiar with her work over the past year or so, I've thought Kelley is among the smartest and most thoughtful writers I've recently encountered, but not everybody who seems smart and thoughtful on the page is also able to seem smart and thoughtful in a conversational interview. Kelley is. 2.) The great and glorious empire of McSweeney's has expanded into the realm of audio via Emusic.com, which is offerin
Read more
More posts