Showing posts from April, 2009
Show all

April 29, 2009
This is the craziest sale I've ever seen. Small Beer Press needs to make some room in their warehouse, and so they're selling a selected group of backlist titles for $1 each, plus shipping. I got the two Small Beer books I didn't already have ( Endless Things and Water Logic , which I didn't have simply because they're parts of series I haven't read, but for $1...) and a couple I plan to give to people as random gifts. It's great stuff -- brilliant collections of short fiction by Alan DeNiro and Kelly Link and Maureen McHugh, Angelica Gorodsicher's extraordinary Kalpa Imperial , etc. Stock up!
Read more

April 29, 2009
Peter Singer, in an interview with Christine Smallwood at The Nation : You're a utilitarian . Utilitarianism tries to maximize the net surplus of happiness over misery in the world. What if billionaire Larry Ellison's yacht makes him really, really happy? This is what some call the utility monster argument. We would have to assume that Larry Ellison actually has capacities for happiness that are vastly greater than anyone else's. Ellison's yacht cost $200 million, and if we assume that $400 can repair an obstetric fistula, that means that the suffering relieved by 500,000 obstetric fistula repairs is not greater than the happiness that Ellison gets from his yacht. That, I think, is not physically possible. But if we ever encountered Martians who could convince us that they had a vastly greater capacity for happiness than we do, then it could be a problem. Then the moral position would be to let the Martians colonize Earth and make us their slaves. Yes, that do
Read more

April 28, 2009
Samuel Johnson, The Idler 88 , "Idleness", 18 November 1758: But Idleness predominates in many lives where it is not suspected; for being a vice which terminates in itself, it may be enjoyed without injury to others; and is therefore not watched like Fraud, which endangers property, or like Pride, which naturally seeks its gratifications in another's inferiority. Idleness is a silent and peaceful quality, that neither raises envy by ostentation, nor hatred by opposition; and therefore no body is busy to censure or detect it. The New York Times , "To Fathom a Colony’s Talk and Toil, Studying Insects One by One" , 27 April 2009: Dr. Dornhaus is breaking new ground in her studies of whether the efficiency of ant society, based on a division of labor among ant specialists, is important to their success. To do that, she said, “I briefly anesthetized 1,200 ants, one by one, and painted them using a single wire-size brush, with model airplane paint — Rally Green, Rac
Read more

April 27, 2009
My latest Strange Horizons column has been posted: " Blasted Horrors ". Subjects this time around: horror fiction, libraries & children, Stephen King, Sarah Kane's Blasted , Robert Aickman. (For my previous thoughts on Kane, see this post .) I thought about dedicating this column to Rick Bowes, who went to see Blasted with me in New York this past fall. It's not the sort of play you can invite just anybody to go see with you. Rick was a good sport about it. Then he reported me to the police. I'll also note that yes, as of right now there is a problem of verb number and agreement in the second sentence. Entirely my fault. I'm terrible with even simple arithmetic. Among the wonders of online publication, though, is that such things can be fixed...
Read more

How to Be Proved Wrong

Now and then, those of us who write book reviews let our guard down and make generalized statements that could be proved wrong with a single exception. Sometimes we buffer such statements with qualifiers that technically relieve them of being pure generalizations, but I doubt many readers are fooled. For instance, last year I wrote a somewhat less than positive review of Nisi Shawl's short story collection Filter House . I even said this: While I find it easy to believe readers will experience Shawl's stories in different ways -- such is the case with any basically competent fiction -- I cannot imagine how a reader who is sensitive to literature's capabilities and possibilities could possibly say these stories offer much of a performance. I certainly made a point of highlighting my subjectivity here: "I cannot imagine how...", but still. The intent is clear. I spent most of the review saying, in one way or another, that this book seemed to me the epitome of
Read more

April 22, 2009
I'm too busy to actually write anything that requires thought, so instead I will give you my favorite encounters with YouTube this week, both from British TV: An inspiring triumph over preconceptions. (No, not my favorite song by a long shot, but a moment to be treasured.) Cthulhu Mastermind.
Read more

A Conversation with David Beronä

Over at Colleen Lindsay's digs, The Swivet, I interview David Beronä , who wrote a marvelous book called Wordless Books: The Original Graphic Novels . One fun bit of trivia I forgot to mention in the intro to the interview -- before David and I had any knowledge of each other, we were both reviewers for Rain Taxi , and you should definitely check out his review there of one of the most recent wordless books to gain a lot of attention, Shaun Tan's The Arrival .
Read more

First, Josipovici , now Coetzee -- Beckett's selected letters are getting reviewed by the best. Deservedly so. Coetzee uses the occasion of a review to give a fine overview of Beckett's life and thought during the 1930s, as reflected in the letters. For instance: Migrations of artists are only crudely related to fluctuations in exchange rates. Nevertheless, it is no coincidence that in 1937, after a new devaluation of the franc, Beckett found himself in a position to quit Ireland and return to Paris. Money is a recurrent theme in his letters, particularly toward the end of the month. His letters from Paris are full of anxious notations about what he can and cannot afford (hotel rooms, meals). Though he never starved, he lived a genteel version of a hand-to-mouth existence. Books and paintings were his sole personal indulgence. In Dublin he borrows £30 to buy a painting by Jack Butler Yeats, brother of William Butler Yeats, that he cannot resist. In Munich he buys the compl
Read more

April 12, 2009
Geoffrey Pullum , co-author of The Cambridge Grammar of the English Language , is not celebrating the fiftieth anniversary of Strunk & White -- in an essay at The Chronicle Review , he writes: The book's toxic mix of purism, atavism, and personal eccentricity is not underpinned by a proper grounding in English grammar. It is often so misguided that the authors appear not to notice their own egregious flouting of its own rules. They can't help it, because they don't know how to identify what they condemn. It's a wonderful take-down, the best I've encountered since Louis Menand's examination of Eats, Shoots, and Leaves ("Why would a person who is not just vague about the rules but disinclined to follow them bother to produce a guide to punctuation?"). The power and popularity of such books is astounding. Both books were quite popular in the high school English departments I worked at, and Strunk & White was often assigned to students. I'
Read more

Silver Kelly and My Golden Age 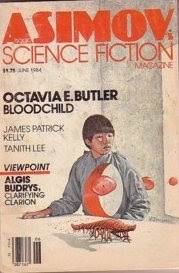 Though it is April, Asimov's Science Fiction magazine likes to stick to the future, and so the June 2009 issue is now available. This is a particularly special issue, as it includes James Patrick Kelly's 25th annual June story -- the first was the June 1984 "Saint Theresa of the Aliens". Last summer, Jim was the guest of honor at Readercon, where he was interviewed by John Kessel , and where I had the privilege of being on a panel about his work -- and of writing a little bit about him in the program book. In honor of Jim's June feats, here is what I wrote about him last year: JPK AND ME: THE EARLY YEARS by Matthew Cheney originally published in the Readercon 19 souvenir book, 2008 I'm not alone in having a golden age, a time when science fiction was the brightest star shining in the galaxy of my life, but I may be alone in being able to tie that golden age to specific issues of a magazine and to a specific byline in those issues. Yes, this
Read more

One thing I love about blogs is seeing people discover books that have become so much a part of my own life that I develop the sense that everybody else on Earth has also read them, and so there's no need for me to talk about them, because we all know these are great books, right? It's nice to be reminded that this is a fantasy -- nice to see people suddenly fall in love with books I've known for a little while already. The great and glorious Anne Fernald just posted a list of some books she's read lately with joy and happiness, and the two books on the list that I've read are ones I recommend without reservation: Tropical Fish by Doreen Baingana and Good Morning, Midnight by Jean Rhys. I first heard about Tropical Fish when I was in Kenya for the SLS/Kwani conference and Doreen Baingana was part of a panel discussion; I found her captivating. Later, a Ugandan friend (who also told me about FEMRITE ) exhorted me to read the book. I did. I exhort you to do
Read more

It was Samuel Delany's birthday on April 1, and the Philadelphia Inquirer has very thoughtfully given him the present of a profile , including comments from Gardner Dozois, David Hartwell, Josh Lukin, Jacob McMurray, Gregory Frost, and others. The article even included a quote from Philip K. Dick that I don't remember encountering before. Dick reportedly called Dhalgren "a terrible book [that] should have been marketed as trash." Gave me a good chuckle, that did. I should also note that I discovered the profile via a particularly excellent collection of links posted by Ron Silliman.
Read more
More posts