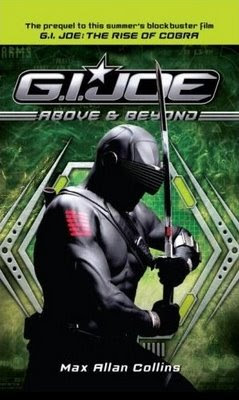 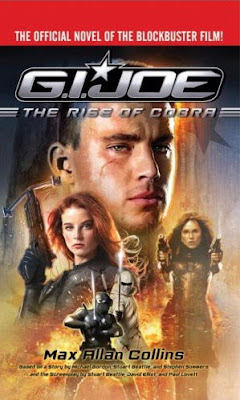 Of course, most of my reading time is spent in my wood-panelled library, smoking my Meerschaum pipe and contemplating the imbrication of hegemonic discourses. Over the past two days, however, I decided to set aside some light reading I was doing (Wittgenstein's Tractatus, which I tend to think of as the Goodnight Moon of philosophical texts) and instead plunge into two books someone at Del Rey had sent to me: G.I. Joe: Above & Beyond

and G.I. Joe: The Rise of Cobra

, both written by one Max Allan Collins.

, which I read when I was about 13), but I am open to new experiences, and the fact that these two are about G.I. Joe sealed the deal.

Before I inhabited a wood-panelled library and smoked a Meerschaum and contemplated the imbrication of hegemonic discourses, I grew up in a gun shop (literally; it was attached to the house). I was seven years old when the G.I. Joe action figures hit the market -- and I got them all. I was not allowed to read comic books (they rot your brain), but an exception was made for the G.I. Joe comics. I watched the animated TV show every Saturday morning. I was hardcore.

I was also a bit of a young literalist -- early on, I decided it was problematic if my action figures killed each other, because I didn't think they could become zombies. My friends lacked this qualm; they routinely killed and resurrected their toys. This made no sense to me, and so I tried hard to avoid playing with my friends. I didn't want their zombie Joes infecting mine. Instead, I spent hours and hours creating complex détente situations.

As you can see, then, reading the new novels was something I simply could not avoid. I was particularly interested to see how the various creators (screenwriters, Collins) handled the problem of killing people. (The animated show had a simple solution: explosions and gunshots are not deadly. This was a dangerous message to the youth of America, but a useful trick for keeping the many important characters alive for the next episode.)

The novels (and, presumably, movie) handle death mostly by killing people who are not regular characters. There are, for instance, in The Pit, many random, unnamed Joes who serve as cannon fodder while the the action figures still get to make it through okay (with various cuts, bruises, etc.). There is one exception to this, but I shan't reveal it.

Both books are origin stories, with Above and Beyond being the tale of Duke and Ripcord's first encounter with the G.I. Joe team and The Rise of Cobra being the tale of how they join G.I. Joe and what creates Cobra (though Cobra as we know it does not appear until the final pages). Above and Beyond is a better novel -- more focused, with an effective and affecting downer for an ending -- while The Rise of Cobra is very much a screenplay that has been fleshed out in prose. I was very curious to know the movie's take on the characters and story, so I was fascinated by the novel, but without having yet seen the film I can't say if it offers anything the movie doesn't.

The changes made to the characters and background of the 1980s G.I. Joes are not terrible -- the group has been globalized instead of being part of the U.S. government: they are now a super-secret force approved by various countries to use any means necessary to destroy particularly cunning evil-doers, and the crew has been internationalized. Backstories are different, too, given that originally many of the main characters had been in Vietnam. Some of the biggest changes are to the stories of The Baronness and Cobra Commander, but to say any more about that would be to give away some of the biggest surprises of the two books...

The 1980s version of G.I. Joe feels to me like a mashup of Doc Savage, Rambo, and The A-Team. The new version still has a whiff of the Doc Savage novels, but with a big dollop of the James Bond movies during the Pierce Brosnan era added. The Rise of Cobra has an especially Bondesqe villain trying to take over control of the world and destroy it at the same time. Above and Beyond is more restrained, with a villain who merely wants to take over all of South America. As with Bond, the ideal audience seems to be adolescent heterosexual boys and maybe some lesbians -- the women are inevitably described as "attractive", while the men are muscular or smart or evil or something else, but never "attractive" (entirely contrary to my own experience, since even at a young age I thought those boys were hot!), and the books are full of soldiers who have lots of fun weapons and who never use a word stronger than "ass" or "bastard". Talk about fantasy!

A political analysis of the books is beyond my abilities, though it could be amusing -- the 1980s G.I. Joe helped post-Vietnam War kids feel good about the military and its endeavors and fear an imaginary all-powerful terrorist force that only a special branch of the U.S. military was skilled enough to combat. In Above and Beyond, the U.S. military and the Joes intervene in a fictional South American country when the saintly free-market-loving president is assassinated and the socialist rebels (who want to nationalize all the country's oil, presumably to make it more like Alaska) are blamed, though it is obvious from the beginning that a power-hungry, apolitical old general is really to blame, allowing a reconciliation between the free-marketeers and the socialists at the end that is brokered in a church -- God and guns being, apparently, the things socialists and capitalists can agree on. The Rise of Cobra is more of a War on Terror allegory, a super-heroes vs. super-villains story, but instead of vigilante super-heroes, the Joes are actually sanctioned by the leading countries of the world in their extra-legal activities (well, except for a brief moment when they have to go rogue, but it all works out for the best, so everybody loves them again in the end). Thus, the world's most powerful and organized and wealthy terrorists must be defeated by the world's best soldiers, with everybody scrambling to see who has the best gear and the best one-liners.

It's enough to make the eight-year-old in my heart swoon!

But now that I have digested the child within, I am returning to my wood-panelled library and my pipe...
G.I. Joe media Movies nostalgia