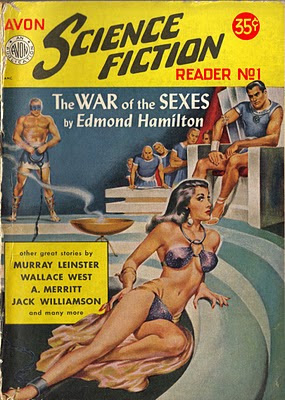 Here are links to PDFs of a couple of old science fiction stories that may be of interest to some folks. (Both, as far as I have been able to tell, did not have their copyrights renewed and so are in the public domain; I'll get rid of the links if I discover otherwise.)

"The War of the Sexes" by Edmond Hamilton was first published in the November 1933 issue of Weird Tales and reprinted once, in the version I have a PDF of, in The Avon Science Fiction Reader, no. 1, in 1951. It's a terribly silly story, bad in just about every conceivable way, and pretty hilarious because of it.

"The Queen Bee" by Randall Garrett was published in the December 1958 issue of Astounding and has never been reprinted as far as I can tell. It is not even remotely hilarious. I found it, in fact, quite disturbing to read. It is a revolting story, a representation of a sick male fantasy made "necessary" by circumstances. (I suspect Joanna Russ may have had the story in mind when she wrote We Who Are About To...) But it reveals certain truths and assumptions. Vonda McIntyre and Susan Janice Anderson got at this in their introduction to Aurora: Beyond Equality, in which they refer to the story (not by name).

I'll put what they say behind the jump, because to get the full effect on a first reading, "The Queen Bee" really needs to be encountered with as little knowledge of its plot as possible.

Both of us remembered countless stories we had read that confined women to tending the algae vats and pushing buttons on the autocook. In one such story, a spaceship is wrecked on an alien planet and each woman is expected to become pregnant to insure survival of the species. One woman refuses and later murders the other women. But her punishment is even more brutal than her crime -- she is sentenced to lobotomy and continual impregnation. If you stretch the point, we thought, this sotry has more symbolic truth to it than its author may have imagined. Women in our society are conditioned to develop their physical attractiveness as a "weapon" to "kill off" other female competition. Confinement to a single role is, in a sense, a sort of psychic lobotomy. But what can such stories offer in the way of alternate role possibilities?