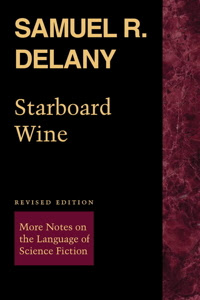 There's a fun Mind Meld feature at SF Signal on "Non-Fiction Books About Science Fiction That Should Be In Every Fan’s Library", with responses from an eclectic group of writers, scholars, reviewers, etc. Well worth a glance. My own prejudices and inclinations align enough with many of the respondents that their lists include a lot of books I've spent a lot of time with, as well as others I'm unfamiliar with, which is always fun. One of the good things the Mind Meld editors do a lot is create agonizingly broad questions that can elicit hugely varied responses depending on how people interpret them; that's part of the fun of the feature. In this case, Gary Wolfe nails it: "I think this question depends on what you mean by 'fan.' Not all fans set out to be students of SF; some just want to enjoy the stuff and have no more interest in finding out about it than in finding out where their sausage comes from. Still fewer aspire to be scholars of the field in the academic sense..."

Things I likely would have added had I participated would have been Damien Broderick's Reading By Starlight: Postmodern Science Fiction, which gives a good overview of a lot of the critical issues that have come up over the last couple decades in SF scholarship, and Samuel Delany's Starboard Wine.

Starboard Wine has been out of print pretty much since five minutes after its publication in 1984. Copies are nearly as rare as moon rocks. But no longer! Wesleyan University Press releases a new edition of the book this month, with an introduction I wrote. It should be available any day now, and the ebook edition is already available from Amazon and Google. (Currently, both editions are listed as by "Samuel R. R. Delany". Apparently, George R. R. Martin has decided he has enough R's, so he's loaning his out now...)

A number of people mention The Jewel-Hinged Jaw in the Mind Meld, and that's all well and good (it's been a hugely influential book for me, too), but only Cheryl Morgan brings up any Delany book that's less than 30 years old — she mentions About Writing, an excellent choice, indeed. But it's symptomatic of, frankly, so much that is shallow about SF criticism that everybody keeps going back to JHJ, and especially "About 5,750 Words", which he wrote when he was 26. Delany's ideas have become, since he was 26, more complex, more subtle, more nuanced, more informed. I love JHJ and everybody on Earth should should buy a copy right now — but they should also at least get About Writing and Shorter Views (which gives a wider exposure to his ideas about texts and the world).

And now, finally, we can add Starboard Wine to the list, because it's his most developed and accessible book focused on science fiction. The difficulty of finding a copy of the first edition made ignoring the book understandable; now, there is no excuse. Carl Freedman gave it an appropriate blurb:


After all the years since it was first published, Starboard Wine remains one of the three or four most important critical statements ever made about science fiction. No one with a serious interest in the field should be ignorant of it.

One thing that the Mind Meld made me think of was a variation on the actual topic. Even though it's against my own best interests to say so, I don't think the world is in any great peril from SF fans not reading enough about SF. The question that bubbled up into the swamp of my mind was:


Which non-fiction books NOT about science fiction should be in every fan’s library?


Of course, there are billions and billions of possibilities (e.g. The Social Skills Picture Book, which I find useful to keep at hand), because most books are not about science fiction. But we could take the basic idea of the Mind Meld to heart and limit it to, say, books that are at least vaguely about writing and reading. And we should impose limits — let's go with no more than 10. I love the completist inclination of some of the Mind Meld responses (because I suffer from that inclination myself — I have been known to have to work hard to repress the need to declare some list or another utterly invalid for not including an essential monograph from 1849 that was printed by Farmer Giles in his barn in Concord, NH one day), but a gigantic list doesn't serve much practical purpose for an exercise of this sort.

What's the audience? That's the hardest question. I have no idea. How about, "people vaguely like the person making the list, except they haven't read the same books." (I'm sure there's somebody vaguely like me out there. Maybe. Starving in a gutter. Raving in a madhouse. Scaring children.)

So here, utterly off the top of my head and subject to massive failures of completism, is my list (alphabetical by author). I'm mostly staying away from the heavy lifters of literary theory, not because I don't always already love/hate them, but because now and then it's good to assume a vaguely general audience.

Also, I'd love to see more lists in the comments, if you're feeling listy...