An Earth Elegy in Memory of Katherine Min 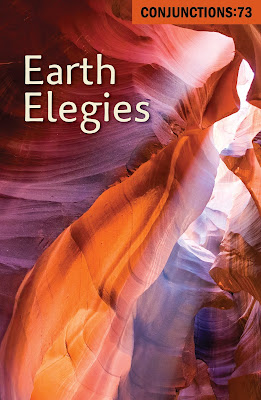 The new issue of Conjunctions collects stories, essays, and poems that are, in some way or another, "Earth Elegies". It includes my most recent story, "A Liberation", which I chose to dedicate to the memory of my friend and mentor Katherine Min.

She was generally known as Katherine, but to me she was Kathie. Or just K. (Kafka was one of the interests we shared.) She died in March, one day after her 60th birthday. It was the end of a long, hard struggle with cancer. I've wanted to write a tribute to her ever since the day of her death, but could not summon words that felt accurate or adequate. I'd known her since I was in college, when she worked in the office next to my mother, and one day she said to my mother that she was thinking about writing a screenplay but didn't know how, and my mother said, "My son's at NYU studying playwriting and screenwriting. I'll put you in touch." And she did. Though neither of us went on to do much screenwriting, we spent time together whenever I was back home, and then when I moved back to New Hampshire, we saw each other a lot. In those days before there was much book culture on the internet, we saved each other by talking about whatever we were reading or writing. She kept my hopes up through years when I couldn't sell a single story to even the most desperate publishers. We had a shared commitment to the short story as an artform, even as we both worked in various genres. (When she sold her novel to Knopf, I think I was happier than I would have been had I sold my own. I interviewed her for this site at the time, an interview I look back on with great fondness now.) Still, we knew, we were short story writers at heart. She taught me a lot about what short stories can be, and sent me off to read countless writers I still cherish. When she decided to quit her 9-5 job and become a teacher, I took one of the first writing workshops she ever taught, and wrote there the story that would be my first publication: "Getting a Date for Amelia".

We left New Hampshire at the same time, in the summer of 2007, I for New Jersey, she for North Carolina. We saw each other only occasionally after that: first, whenever she visited New York (that city was another passion we shared), and then, once I returned to New Hampshire, whenever she did a residency at the MacDowell Colony, one of her favorite places in the world. The last time I saw her in person was at the AWP Conference in Los Angeles in 2016.

When my mother died in November 2018, one of the hardest notifications to make was to Kathie. She and my mother had been friends on Facebook and found comradeship in illness, comparing notes, for instance, on how to get around with oxygen tubes and tanks. Kathie was direct and never put up with any obfuscation or euphemism, so I told her what I hadn't told anybody else: about my mother's last moments, about how peaceful those moments were, how good. Though herself struggling to write much more than a few words at that point, she sent me a lovely note, and I knew she had read, as she always did, my intention.

I began writing "A Liberation" before Katherine's death and before my mother's death, after seeing some pictures of Norilsk, Russia. I only got about a thousand words into the story, though, before I stopped. I had a setting and a character, but no sense of purpose. I thought it would never get written, but then, a couple months after Katherine's death, I returned to it, and suddenly the whole story was there. It was the first piece of fiction I managed to finish in six months.

While editing "A Liberation", I thought, Kathie would've understood this story. And she would have understood how proud I was to have a new story in Conjunctions, a journal we both respected highly, though differently for me, because Conjunctions feels more like my aesthetic home than I think it did for Katherine, who had other homes. When Brad Morrow let me know that he would publish the story, I thought not only how much I wished I could tell K that I'd be returning to Conjunctions, but I also wished that she had published there herself. I know she would have loved to see her name in its austere font and layout.

Here, I realized then, was a tribute I could offer, even if I do not (even now) have words to memorialize our friendship: I could get her name into the pages of Conjunctions alongside my own. And I could do it with a story about staying alive in a world that is dying, a world full of the dead. An elegy for the Earth, yes, but also, more directly, more concretely, for my friend, one of the people without whom I would not be anything like my self. In memory of, because her memory lives on. 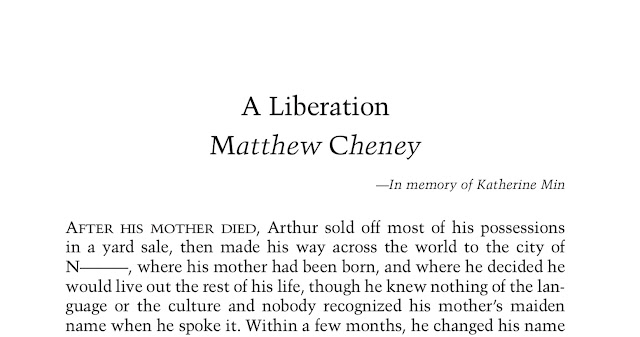