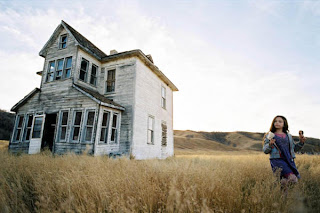 I'm a die-hard Terry Gilliam fan, so would have seen Tideland at the first opportunity no matter what, but even if I weren't a Terry Gilliam fan, how could I not be intrigued by the reviews it got -- "You watch the film feeling abused and exploited", "ugly visuals and even more unpleasant behavior", "easily the worst production Gilliam has ever been involved in", "has the effect of a prolonged shriek", "virtually unwatchable", "borderline unwatchable", "unwatchable", "squirmingly unwatchable", "one of the most stunning mistakes of the first decade of the 21st century", "It might be said that [Gilliam's] imagination knows no boundaries; it might be good if he found some."

Even though I have a certain perverse pleasure whenever I can disagree with just about everybody, I still went into Tideland with pretty low expectations, because ... well, I'd seen The Brothers Grimm. But I didn't hate The Brothers Grimm. I just thought it was slack and all over the place and unsatisfying. It had moments of marvel and wonder, which is what I most look for in Gilliam movies, but there weren't nearly enough of them, and they didn't add up to much -- it felt like Gilliam-lite.

Tideland, on the other hand, feels like what might happen if Gilliam took over a film directed by David Lynch from a screenplay by Tennessee Williams. The nasty reviews are hyperbolic, but it's certainly easy enough to see why Tideland caused some strongly negative reactions: much of the subject matter is pretty repulsive (not everybody's all that excited by human taxidermy, for instance), the pacing is generally slow, the characters are over-the-top even for Gilliam, and lots of nastiness is seen through a child's naive perspective. 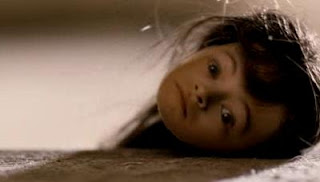 I wouldn't say I'm going to rush out to watch Tideland again, but I'm also not as ready as many reviewers to call it a horrific mess. Too many images have remained with me for days after seeing the movie for me to dismiss it as worthless. And not just the repulsive stuff, either.

The film tells the story of a little girl named Jeliza-Rose, whose parents are junkies, and who goes off into the Midwestern wilderness when her mother dies and her father decides to flee. They live in the house Jeliza-Rose's father grew up in, now abandoned and vandalized and rotting, until everything gets much weirder. There's an element of grand guignol comedy to much of what happens, but the best moments are an unsettling mix of comedy, nausea, and tenderness. It's ridiculously sentimental and yet also oddly not, because though Gilliam's idea of childhood is as syrupy as Hallmark, his imagery continually undermines the syrup with castor oil. (Some of the most effective props are severed doll heads.)

I don't have any good way to sum up my feelings about the movie, and so I will now change the subject and send you off to read Matt Zoller Seitz's review of Zodiac, a movie I saw today and thought was okay but not amazing. The insights in Seitz's review make me want to see it again, though, because I think there's more there than I perceived on a first viewing. (Mostly, I thought it was a lesser version of an approach to police procedural stories that the excellent Korean movie Memories of Murder handled with more depth. Because Seitz saw vastly more in Zodiac than I did, I'm now curious to watch it again with his perspective in mind.)
Gilliam Movies