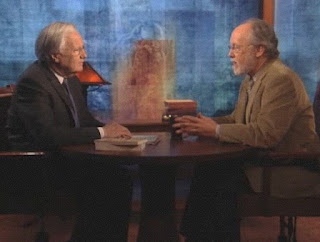 I'm not writing about nature. I'm writing about humanity. And if I have a subject, it is justice. And the rediscovery of the manifold way in which our lives can be shaped by the recovery of a sense of reverence for life.
--Barry Lopez

The final guest on the final episode of Bill Moyers Journal was Barry Lopez, and it's half an hour of riveting, inspiring conversation.  The video is here.

Ten years ago this summer, I attended the Bread Loaf Writers' Conference and Barry Lopez was my workshop leader.  Those were some of the most powerful and invigorating days of my life, because Lopez was exactly the person I needed to work with at that particular moment, a moment when I doubted the purpose of writing and felt that I had wasted the countless time I had spent in the activity of writing stories and plays and essays, almost none of which at that point had been read by anyone other than my friends and teachers.  I went to Bread Loaf because it felt like a last chance, and I went in cynical.  I left with the tools with which to build a stronger, less avaricious, more personal sense of purpose.  I still have a fraught, conflicted relationship to the idea of writing for an audience, and writing remains the most vexing activity in my life, but Barry Lopez gave me ways to work through the vexation, a way to use the despair that resides in the chasm between words and things, between writer and reader.

Lopez's ideas have been mostly consistent through the years, and it was reinvigorating to encounter his conversation with Moyers, because some of it echoed things he told us at Bread Loaf.  We extended and expanded the conversation over the hours we were together, but the seeds are all there in the PBS discussion.  Here's a story Lopez has been telling for years, and which had a particularly profound effect on me when he told it to us at Bread Loaf:


I was in Japan. I was with a novelist, a man named Kazumasa Hirai. And everywhere I've gone in the world, I've said-- he was a storyteller, you know? We call him a novelist. But he was just a storyteller. He's like me.

BILL MOYERS: As a storyteller?

BARRY LOPEZ: As a storyteller.

BARRY LOPEZ: And Kazumasa San said to me, "Your work is to take care of the spiritual interior of the language." And he said in Japanese this word we use, kotodama, means that each word has within it a spiritual interior. The word is like a vessel that carries something ineffable. And you must be the caretaker for that. You must be careful when you use language to look at every part of the word and make sure that you're showing respect for it in the place that you've given it to live in the sentence.

But I see all of us engaged in the same thing. And that is the invention of the story. And the story to me is the brilliance of storytelling is that it's the only and the best protection we have against forgetting.

I think, what is at the core of every story. I mean, how many novels have you put down and said to yourself, "Oh, I never knew that." Mostly you know it all, but you forget it. And you close a book and you say, "I knew that, but I'd forgotten it. And I am so glad to be reminded of what I intend to do and who I am. And what-- and how I want to conduct myself in the world."

Where I start from is ethical responsibility to an audience. The creation of something that is as beautiful as you can make it. And that in some way ensures that what we dream, what we really desire, not for ourselves, because that's what you do when you're a kid, but for children -- how will you ensure some possibility here by making sure we don't forget where we're going or what we're up to.

The spiritual interior of the language.  The best protection against forgetting.  The responsibility of the writer, the storyteller.  It's not about publishing, it's not about maintaining a career or feeding the monster of ego.  There are times when those things matter, but they're not what the activity of writing is about.  Anyone who chases primarily those things is a widget maker in a factory of useless widgets.  Writing that goes beyond widget-making is writing where the writer to the best of her ability pays attention to that which is ineffable, that which exists in the unbridgeable gaps -- the spiritual interior of the language itself.  But that's only half of it.  The other half is the remembering, the power storytelling has to combat our short memories and to weave together a perception of humanity in the writing and the reading.  A piece of writing that contributes powerfully to one person's reverence for the spiritual interior of the language and to remembering what matters is a more valuable piece of writing than one that is encountered by a million people but does not do that.

These are not abstract, academic, or woo-woo New Age questions -- connect them to, for instance, Ngugi wa Thiong'o's ideas about dismemberment and re-membering and you will see how what Lopez is saying is not only interesting philosophically, but necessary to anyone who hopes to explore the beauty and terror of life.  In a half-hour conversation, even with someone as marvelous as Bill Moyers, Lopez doesn't have the opportunity to expand his ideas with examples and implications, but for that you can turn to his stories and essays, particularly "The Rediscovery of North America", About This Life and Resistance, though short stories such as "The Mappist" are perfect spots to start from, too.

Some of my colleagues in Lopez's workshop were annoyed by his focus on philosophy and his flouting of the regular workshop format.  These were folks who in their own ways had made their peace with the act of writing and sought little more than technical advice.  They wanted to know how to shape their sentences and paragraphs and pages into something a New Yorker editor might be interested in, something that might get them a good contract with a publisher like Knopf.  They wanted technique and critique.  They didn't want to hear about ancestors and mystics, about spiritual interiors and fiction against forgetting, they didn't want to talk about Rwanda or Antarctica, and they certainly didn't want somebody like Lopez exhorting them to think about responsibilities.

"Their loss," I thought then, and think now.