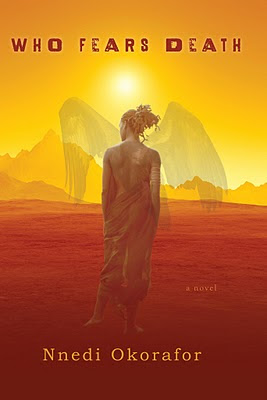 I just finished writing a long review for Rain Taxi of Nnedi Okorafor's Who Fears Death, and it's one of those rare books that I just want to recommend to everybody.  It's going to the top of my list of really good science fiction/fantasy novels that can be safely given to people who think they don't like SF, but it's also a book that can be appreciated both by people who merely want to read an engaging story and people who want more than just a good story.

I had so much fun writing a review of Who Fears Death because it is, among other things, very much a book about textuality and storytelling -- about how the stories we tell, the words we use, the structures and vantage points we select, affect our perception of the world.  I kept thinking of some of M. John Harrison's books and the way they throw our readerly expectations and habits back in our face.  Some of the pleasure, though, in reading Harrison is masochistic ("Yes, master, flog me again for my desire for fantasy!"), but the effect of Who Fears Death is very different, despite the many horrific events experienced or observed by the characters, because its view of fantasy is more generous -- the world is, it seems to say, made up of stories.  They're how we understand things.  So be careful in the stories you tell and the stories you listen to, but don't give up on myth and legend and fantasy.  (In that, it's more Barry Lopez than M. John Harrison, really.)

Though the review I just sent off is 1,500 words, I felt like I could have gone on at twice that length, and I fear what I wrote is too general.  I didn't even find a way to write about the epigraph from Patrice Lumumba that opens the book ("Dear friends, are you afraid of death?") -- one of the fascinating things about the novel is how it uses fantasy in a kind of dialogic approach to reality, thus illuminating both.  For instance, part of the story uses a quest structure with echoes of Lord of the Rings (including a giant eye of evil) to critique both the good/evil dichotomy of so much epic fantasy and the good/evil thinking that fuels massacres and genocide in our own world.  The stories we tell ourselves are not innocent -- they affect how we behave toward each other, and Who Fears Death shows that vividly.  It's also about other types of fantasy -- for instance, the common one that the Harry Potter books so effectively exploited wherein nerdy or awkward folks become the saviors of the universe.  Typically, once they've saved the universe, those characters go on to have great lives in the epilogues of their books.  It doesn't really give too much away to say that Who Fears Death is smarter than that about what heroism and fate can demand, while also recognizing that stories, to be useful, may need to answer some of the ambiguities more common to life than fiction.  Just because there are lots of lies in legends and myths doesn't mean we don't need them or that they don't tell truths about life; we just need to be careful in how and why we choose to keep telling them.

The method of the novel's telling will probably not obsess ordinary readers the way it did me, because I'm always obsessed with the Barthian question, "Who speaks?"   There are a variety of levels of narration in the book, and it seemed to me to be a kind of fictionalized fiction: Onyesonwu, the protagonist, may be the narrator for most of the novel, but her narration is not "realistic", but rather novelistic -- not only is it full of dialogue in a way it probably would not be were it the transcription it is presented as, but both the dialogue and narration are shaped and intentional in a way off-the-cuff storytelling is not.  Everything exists for expository purposes, and there's none of the noise we get in even a very stylized novel like JR, nor the delight in the rhythm and stagi-ness of scripted dialogue that is David Mamet's calling card -- instead, we get fluent, deliberate, written conversation that moves the story along ... just like most novels that aren't posited as told tales give us.  I don't know if this was intentional on Okorafor's part or not, but it doesn't matter, because the effect is marvelous, suggesting multiple levels of distance from the actual (in a diegetic sense) telling of the tale.  What we are reading, then, is a novelized legend that wants to pass itself off as a transcribed autobiography, and this conceit fits wonderfully with so much of what else is in the book.  And then the final chapters add complexity to it all.

Anyway, the novel is wonderful in all sorts of different ways, and I'll be writing more about it, I expect, probably in my next Strange Horizons column, because I happened to read it while I was also reading Timmi Duchamp's fascinating anthology of essays Narrative Power

, and the three books really had an awful lot to say to each other, at least in my mind.  More on all that later, though...
Africa books fantasy M. John Harrison narrative Nnedi Okorafor reality reviews