The Lengths of Nolan

July 25, 2010
Some friends and I went to see Inception this afternoon because we had some time to kill and we were all curious about it. For a summer blockbuster, it's not bad at all.

Of course, you knew there would be a "but". For a summer blockbuster, it's not bad at all, is the faintest of praise. It's not like the competition is exactly a pantheon of cinematic glory.

My feelings about the film are similar to those of Dennis Cozzalio, who wrote a long, thoughtful post that relieves those of us who agree with him from having to say a whole lot more. He says, "It’s not a dreamer’s movie, it’s a clockmaker’s movie," and that sums it up well for me. I didn't strain as much to keep up with the background and plot as he did, but I suspect that's just because I'm very familiar with science fiction exposition. (I think Abigail Nussbaum also has a lot of insight into the movie, particularly from the SF angle.) The puzzle aspects of the film are fun, and they keep our brains engaged while watching, which is more than can be said for most summer blockbusters.

It's awfully long. That was the biggest impression the movie made on me. It wasn't as annoying to me as The Dark Knight, a film I thought so extraordinarily bad in many ways that I just couldn't get much pleasure at all out of watching it the first time (it's actually an interesting film to re-watch, I think, once you no longer expect it to be particularly good on the whole, because there are some moments of magic, and the ways that it's bad are, at least to me, interesting). Inception is entertaining. But it's awfully long.

I recently watched Christopher Nolan's first feature, Following. It's clever and enjoyable in that utterly-contrived-puzzle way that is Nolan's forte. It's also 69 minutes long. Just about the right length for its content. I haven't seen Memento for a while, but I remember it feeling more or less economic in its narrative -- or, at least, I don't remember it lasting for forty days and forty nights like The Dark Knight.

That got me wondering...

I looked up the running times of all his feature films on IMDB, and made a chart: 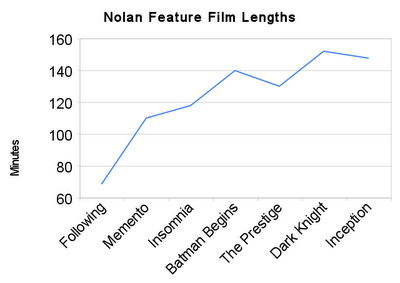 Interestingly, The Prestige is the only film with a significant move downward in length. Further, it's the one Nolan film I hold in really high regard -- it is, indeed, easily one of my favorite films of the past decade. (Some of the reasons are purely personal rather than aesthetic or rational ones -- I've a fondness for stories about stage magicians and for novels by Christopher Priest, and as adaptations of novels go, I agree with Priest that it's an excellent one.)

For those of us who prefer Nolan's less ... prodigious ... work, there is hope: Inception is four minutes shorter than The Dark Knight, so perhaps his future movies will reverse the trend toward epic length and give us a few more films of the quality of The Prestige.  With luck, Nolan will not prove such hopes to be less real than dreams.