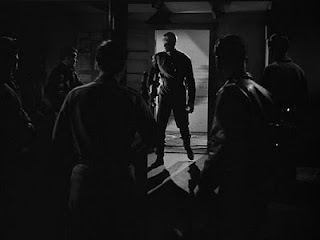 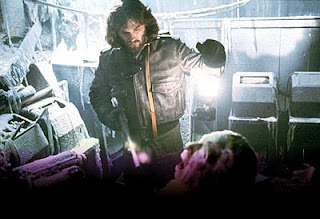 Over at The House Next Door, John Lingan offers some thoughts on both the 1951 and 1982 films of The Thing, films well worth viewing and an essay well worth reading.

The 1951 version is credited as directed by Christian Nyby, but most evidence points to Howard Hawks, who is credited as producer, having done most of the work we'd generally associate with a director.  (For the whole story of this, see Todd McCarthy's wonderful Hawks biography.)  John Carpenter, who directed the 1982 version, is a devout Hawks fan, but interestingly, The Thing is a much less Hawksian movie than some of his others.

I like both versions very much, though Hawks's seems to me relatively minor in comparison to masterpieces like Scarface, Only Angels Have Wings, His Girl Friday, Bringing Up Baby, The Big Sleep, To Have and Have Not, and Rio Bravo, each of them among the greatest films to come out of Hollywood. The Thing is wonderful on a variety of levels (though perhaps least on the level of genre: Hawks doesn't seem particularly interested in the monster movie elements).  Hawks's works are studies in humanism, and The Thing, with its science fictional trappings, gave him a special opportunity to explore that humanism on a kind of species level.  Robin Wood says of the ending:


The climax of the film gains great intensity by [Hawks's] determination to keep us aware of the strength of the opposite position.  The Thing, when at last we see it clearly, loses much of its terror.  In medium long-shot and from a medium-high angle, it ceases to look huge, and its close likeness to a human being (the human being of a future to which [the scientist] Carrington looks forward) becomes evident.  (I can't imagine why people find this a weakness of the film: do they really want a goggle-eyed robot?)  The impossibility of communication becomes almost poignant -- it looks as if it would be so easy to talk to.  It is destroyed: we watch a marvellous, if terrible, being reduced to a small pile of smouldering ashes, on which the camera lingers to allow the spectator a complex reaction: we have been made to respect Carrington's viewpoint sufficiently for us to find the outcome a triumph not unqualified, a reaction shared by the characters on the screen, who stand by in stunned silence.  We also realize Hawks's position here is not the simple anti-intellectual one that could be read into Bringing Up Baby: the Thing has been destroyed by science.  One of the points that emerges is that science is for man's use -- Carrington's viewpoint would turn everything topsy-turvy, making man the servant of science.


Carpenter takes Hawks and Nyby's basic plotline and removes the madcap pacing and romantic subplot, relocates the action to the southern hemisphere, and leaves his camera to linger on the desolate landscape in his early scenes. The narratives and small physical locations of The Thing from Another World [the title of Hawks's film changed once Carpenter's was released] and Rio Bravo informed Carpenter's earlier films like Assault on Precinct 13 and Halloween, yet in The Thing, ostensibly his most direct homage, he almost literally rips up the script and starts again; his film is a grim existential nightmare more indebted to Agatha Christie and Samuel Beckett than to Hawks's warm professionalism.