"How to Play with Dolls" 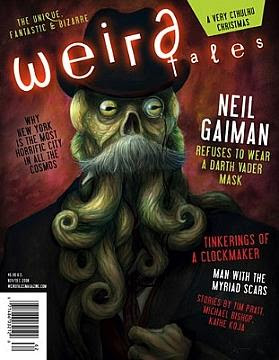 How to Play with Dolls
by Matthew Cheney

Jenny's father spent a year making a dollhouse for her, a three-storey mansion with four gables and six chimneys and secret passageways and a dumbwaiter and a tiny television that, thanks to a microchip, actually worked.  He gave it to her on her seventh birthday.  Jenny thanked him and kissed him and told him she had always wanted an asylum for her dolls.

Though he wanted her to make the house into a pleasant place for tea parties and soirees, Jenny's father stayed silent as he watched his daughter restrain her dolls with straightjackets fashioned from toilet paper.  He kept his silence as she built prison bars with toothpicks and secured every door with duck tape.  But as she placed the dolls into their cells and set a group of them to stare at the television, he could not observe quietly any longer, and so he went to his workshop and reorganized his impressive collection of antique awls, adzes, augers, and axes.

Jenny continued in his absence.  She created schedules for the patients, times when they could wander through the halls or make origami birds or rant and rave without reproach, or sleep in the cots she had built out of matchboxes stolen from her late mother's private stash.  She had considered appointing some of the dolls to be doctors, but she did not trust them, and so retained all supervisory duties for herself.  She did not sleep, for fear that were she not to keep a vigilant watch, the dolls would revolt or, worse, harm themselves.  She despaired, though, because none of the patients seemed to be making any progress.  Instead, they were all becoming recalcitrant, and they did not want to wander or create anything, they stopped ranting, they let the television slip to a channel of grey static, they slept and slept and slept.  Jenny tried extreme measures: water dunking, severe lighting, simulated earthquakes, and even, with a contraption made from spoons and Christmas tree lights, electrocution.  Nothing got better, and the dolls might as well have been dead.

After a month, Jenny's father returned from his workshop with delicately-detailed miniature hot air balloons, and as Jenny sat beside her asylum and wept over the helpless despair of the dolls, her father orchestrated clever escapes for the patients, who proved to be masterful balloonists, each and every one.  They flew to the paradise of Jenny's bed, where they waited until she returned one night, the asylum having been abandoned, and they embraced her in their tiny arms and sang ancient songs in lost languages while she slept, her face wet with tears from her dreams.