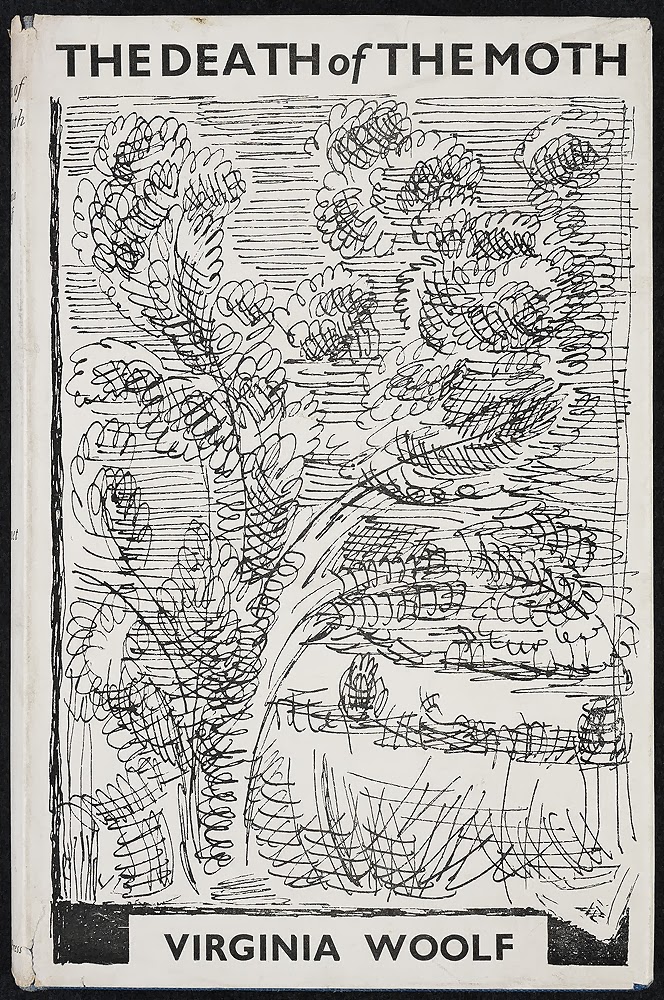 Forced by some reductive power to declare a single favorite essay, mine would be "The Death of the Moth" by Virginia Woolf. It is a marvel of concision, and yet it contains the universe. It is an essay both personal and cosmic, material and spiritual.

Whenever I teach writing, I use "The Death of the Moth" as an example of the interplay of form and content. (While I have seldom met a pairing I didn't want to deconstruct, the form/content binary is one I continue to find useful. Yes, the separation is problematic — what, in language, is content without form or form without content? — but I also find it a valuable way to talk about concepts that are otherwise invisible or easily muddled.) Usually, I take one sentence, scrawl it out on the board, and pick it apart. It's not always the same sentence, but recently I've been using this one:


Yet, because he was so small, and so simple a form of the energy that was rolling in at the open window and driving its way through so many narrow and intricate corridors in my own brain and in those of other human beings, there was something marvellous as well as pathetic about him.

The first thing to do is break the sentence apart. Here's one way: 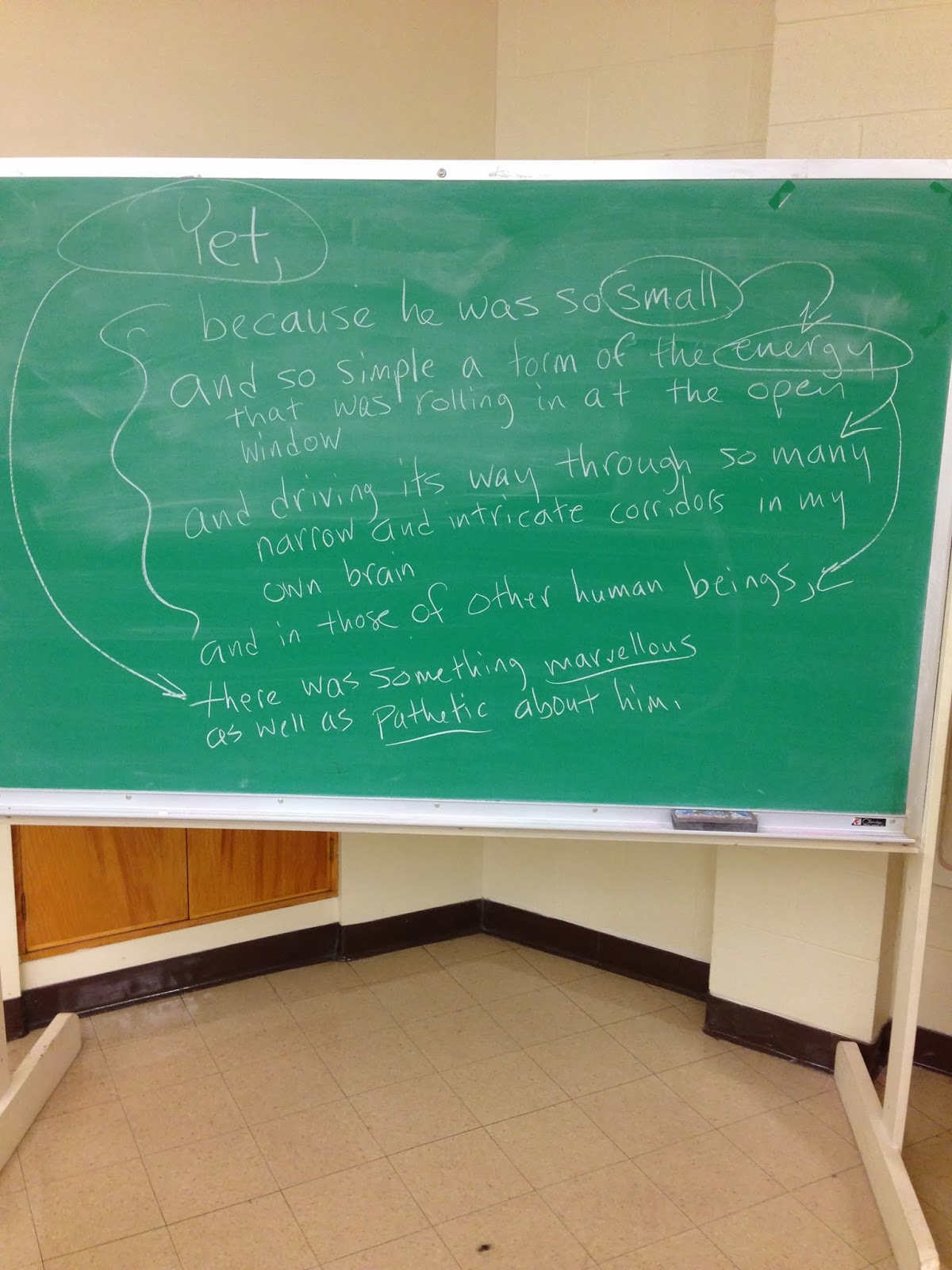 because he was so small,
and so simple a form of the energy that was rolling in at the open window
and driving its way through so many narrow and intricate corridors in my own brain
and in those of other human beings,

there was something marvellous
as well as pathetic about him.

One thing we can do is try to paraphrase the basic meaning of the sentence, to get at what it says and does before we tackle the how.

It says that there was something marvelous and something pathetic about the dying moth. It doesn't only say that, of course, but that gives us a starting point. All right. How does it say what it says?

The first word sets the sentence up in opposition to what has come immediately before it. The second word prepares us for answers to a question we don't necessarily know yet.

And now we can't avoid questions of form. The sentence is complex and, especially on a first reading, beguiling. It is possible that this sentence is difficult because Virginia Woolf is a bad writer, or she was half-asleep when she wrote it, or some other flaw. After all, this essay was not published in Woolf's lifetime. Maybe she thought it was a dud.

This is where, in class, I bring in Peter Elbow's believing/doubting game. In academia, we're used to playing the doubting game. We seek out flaws, weaknesses, troubles. But if we switch our frame of thinking, new insights are possible. Let's assume, for instance, that we are not smarter than the writer. Let's assume that the writer was vastly more skilled and intelligent than us. Let's assume that there are no flaws. Such an assumption (game) forces us to seek the reasons, rather than condemnations, for what perplexes us.

(As I said above, this is my favorite essay. Woolf is one of my favorite writers. I completely believe she was more skilled and intelligent than I. I have to force myself into the doubting game with Woolf, because all I want to do is believe, believe, believe. But I'm talking pedagogy here. My students typically find the essay boring and pointless, and they think Woolf writes difficult sentences to annoy them. I like to find ways to circumvent those feelings other than screaming, "Stop being an arrogant and defensive reader!")

If we look back to how I broke the sentence up above, we can see that it can break into three major parts: the introductory word (a transition that positions the sentence in relationship to other sentences), the because section, and the final statement. We know what the introductory word does, but what about the middle section? What does it do, particularly in relationship to the final statement?

The middle section elongates or prolongs. It keeps us away from the final statement. It's important, then, to look at how it does that: not with a randomly long statement, but with phrases connected with the word and. (Here, I often read the middle section aloud at least once, dramatically emphasizing the word and at the start of each section. The and between narrow and intricate can be a little confusing, as it's connecting something different from the other ands, but that's why I don't separate it out visually. I've sometimes thought of replacing the word with an ampersand.)

Each of these ands serves to push us away from the final statement one more time.

Thus, the sentence does to us what the moth is doing: it fends off, for as long as it can, finality. The moth's struggle is replicated in the sentence's structure.

Part of the wonder of "The Death of the Moth" is that it achieves so much in so few words. It does so by uniting form and content in a specific way. Over and over, the essay replicates in its structures what it is "about". Again and again, Woolf forces the reader to consider scope. We move from the very tiny to the cosmic. The cosmic is shown to contain the microscopic, the microscopic to contain the cosmic. Life is strange and death is strange, and the two are also, like form and content, inseparable.

It's not known when Woolf wrote the essay. It's tempting to read it as something she wrote late in life, as she struggled against her fears and depression as World War II began. But the insights of the essay are more universal than that, and the struggle the speaker identifies with is one that Woolf expressed through much of her life. (In the sixth volume of The Essays of Virginia Woolf, Stuart N. Clarke writes that "it might have been composed in September 1927", but it's also just as likely that it might not have been.) The essay captures not only the scope and scale of existence, but it also represents many of the recurring ideas in Woolf's writing.
pedagogy sentences teaching Woolf Writing