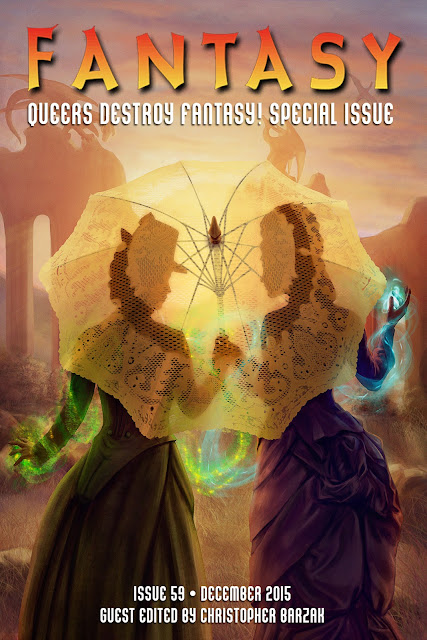 I was honored to be the nonfiction editor for a special issue of Fantasy magazine, part of the ever-growing Destroy series from Lightspeed, Nightmare, and Fantasy — this time, QUEERS DESTROY FANTASY!

The editor-in-fabulousness/fiction editor was Christopher Barzak, the reprints editor was Liz Gorinsky, and the art editor was Henry Lien. Throughout this month, some pieces will be put online. So far, Austin Bunn's magnificent story "Ledge" is now available, as are our various editorial statements. More will be released later, but most of the pieces I commissioned are only available by purchasing the ebook [also available via Weightless] or paperback. There are magnificent pieces by Mary Anne Mohanraj, merritt kopas, Keguro Macharia, Ekaterina Sedia, and Ellen Kushner, and only merritt's "Sleepover Manifesto" will be online.

I owe huge thanks to all the contributors I worked with, to the other editors, to managing editor Wendy Wagner who did lots of unsung work behind the scenes, and to John Joseph Adams, who kindly asked me to join the team.
Barzak Cheney publications fantasy JJA Liz Gorinsky Magazines queer