Posting here is likely to continue to be sparse for a while, aside from occasional announcement-type notes such as this one. I'm preparing for Ph.D. qualifying exams and anything not related to that and/or to the impending release of Blood: Stories has been cut from my waking hours since this summer.

Blood: Stories has an official release date of February 20. It is at the printer now as I write this, and can be ordered not only from the publisher, but also from Amazon (U.S.), Barnes & Noble, and Small Press Distribution. (It hasn't hit Book Depository yet, but when/if it does, I'll post a link, as that's often the least expensive way to order internationally.) There will be an e-book version eventually, but not until this summer at the earliest. BLP also has a new subscription series for their books, which has various options, all of which are less expensive than buying the books individually.

I'll be in New York City this coming weekend to read at the Sunday Salon series on February 21 at Jimmy's No. 43 (43 E. 7th St.) at 7pm alongside Alison Kinney, Thaddeus Rutkowski, and Terese Svoboda. If you're in the area, stop by!

Various other events are coming up, too. I'll mention them here, but you can also keep up with things via Twitter, my newsletter, and/or the book's Facebook page. 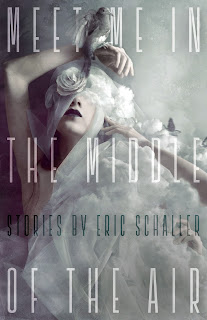 Speaking of books, Eric Schaller's debut story collection, Meet Me in the Middle of the Air, has now been released by Undertow Publications (and is available as both a bookbook and an e-book at the usual outlets). It's a marvelous concatenation of stories of horror, dark fantasy, and general weirdness. Some are disturbing, some are amusing, some are both. It's a really smart, entertaining book. I'm especially pleased it's coming out now, near to the release of my own collection, because Eric has been my erstwhile partner in a number of crimes, including The Revelator (a new issue of which is impending. Even more than its been impending before). Eric hasn't always gotten the credit he deserves as fiction writer because he only publishes stories now and then, and often in somewhat esoteric places, so it's a real pleasure and even a (dare I say it?) revelation to have a whole book of his work and to get to see the range and complexity of his writing.

Finally, in terms of new work, I have exciting news (well, exciting to me) -- my story "Mass" will appear in the next print issue (issue 66) of Conjunctions. It's a tale of academia, mass shootings, and theoretical physics. Having it published by Conjunctions is almost as exciting for me as having a book out, because Conjunctions is my favorite literary journal, the place where the aesthetic feels most convivial to my own, and I've been submitting to it for almost 20 years. I've had stories on the website twice ("The Art of Comedy" and "The Last Vanishing Man"), and numerous stories that came close, but were not quite right for the theme of the issue or didn't quite fit with other material or just weren't quite to the editors' tastes. Getting into the pages of Conjunctions means more to me than getting into The New Yorker or any other magazine would (although I'd love the New Yorker paycheck!).

I think that's it for news. Thanks for reading, and thanks for bearing with me!
Announcements