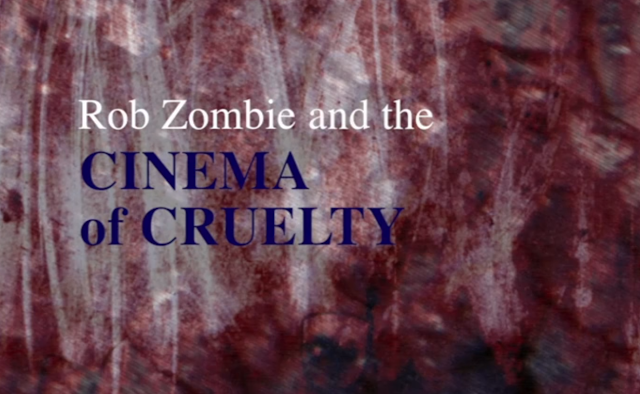 By summoning the spirit of previous movies, particularly, Zombie encourages us to think we are watching a familiar pattern of story and character. We think we know how and where to be shocked or repulsed, whom to put our faith, trust, and hope in. We let down our guard.

Into the gap between our expectations and the reality of the film in front of us, Zombie sets traps to shred our desires.


It was sort of like Ken Russell films or like Polanski or some Argento films or Kubrick. There’s only certain filmmakers who really do this – and David Lynch does it – where just the vibe of the movie is odd all the way through. A David Lynch movie is just odd even when people are doing normal things. You’re like, “Why does this feel so weird? What’s happening here?”
—Rob Zombie, The Playlist interview with Drew Taylor, 29 April 2013

Zombie’s movies are explicitly, extravagantly, and defiantly products of low culture. The only sort of filmmaking less reputable than gory horror movies is porn. Both traffic in sensation and exploitation. This is why we need them. They’re all that’s left to break through the cool surface of protective irony and oh-so-earnest, respectable emotionalism that so many of us perform and parade and reward every day — to break through into some part of our selves that few of us want to share with the rest of the world. Such movies are the antidote to mumblecore and emo and Oscar bait. We should watch these movies in seedy theatres where the floors are covered with entire archaeologies of dirt, grime, rot, and petrified bodily fluids. We should stare down at those floors and look for our reflection, for it is there that we will find ourselves best preserved.

Which is why I thought of Antonin Artaud when I was putting together this video essay. I want us to reclaim Artaud from the high cult of goodness, where so many academics and critics have made excuses for him, tried to tame him, tried to make him fit the higher cults. Those of us with some academic persuasions need more shit in our systems.

I go to the library and grab a book off the shelf: Antonin Artaud: A Critical Reader edited by Edward Scheer, where, in an essay titled “Cinemas of Cruelty?”, Francis Vanoye writes:


If we want to stay close to Artaud while betraying him, as we must, since we are trying to promote a cinema of cruelty, we must exclude all pure and simple representations of cruelty (Sergio Leone?), all reductions of cruelty to violence, crude sadism and blood, we must therefore exclude a good part of the cinematic production of the past and especially the present. Quentin Tarantino, for example, and his emulators, French or American, who make of cruelty an object of representation and of spectatorial pleasure.

Maybe such a betrayal of Artaud is necessary in France, but it sure isn’t necessary for me, an American, someone whose tax dollars have funded atrocities throughout the world, whose political system is nothing if not cruel, whose economic system is designed to strengthen the powerful and marginalize the weak. No no no, we need a cinema of cruelty that matches the cruelty of our hearts and citizenship. We need representations that show us ourselves. We need images that make us want to look away at the same time they make us want to watch. The Devil’s Rejects shows us, for instance, sadists we at first fear and detest, and then it shows us that these are our heroes, and it gives us just enough of the necessary tropes to make us want them to suceed in what we know is sadistic. These, the film says to us, THESE are your heroes. They could be tour guides at Abu Ghraib.

What Zombie recognized in his Halloween movies is that our slasher films are character studies in disguise. Halloween tempts us to learn to love Michael Myers, tempts us to recognize him within the realm of child psychology, tempts us to recognize him as our child or ourselves. He is no mere cypher, no flat archetype, but rather a black hole of desire to attract our matter. Halloween II is another world altogether, the beginning of a new (more explicitly Lynchian) direction in Zombie’s work, an oneiric trap. Real and unreal don’t exist in such a world: they are each other. We seek realities, but Halloween II and The Lords of Salem refuse to give in to that desire, and instead show us that our need for the real is a need for comfort.


In the practice of cruelty there is a kind of higher determinism, to which the executioner-tormenter himself is subjected and which he must be determined to endure when the time comes. Cruelty is above all lucid, a kind of rigid control and submission to necessity. There is no cruelty without consciousness and without the application of consciousness. It is consciousness that gives to the exercise of every act of life its blood-red color, its cruel nuance, since it is understood that life is always someone’s death.
—Antonin Artaud, “First Letter on Cruelty”, trans. Mary Caroline Richards

If Rob Zombie’s movies understand nothing else, they understand that life is always someone’s death.

Why does this feel so weird? What’s happening here? Our perspective is being readjusted, our shame exposed. We have not earned the comfort we desire. For a moment, we must recognize what perhaps we have unconsciously known, the horrid truth we have represed: that we are not the innocent victims, but rather the executioner-tormenter. And deep down, that’s what we’d rather be.