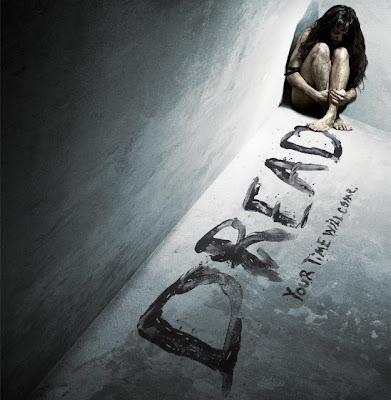 Anthony DiBlasi's movie Dread may be compelling for folks who haven't read the Clive Barker story that inspired it, but anyone who admires the grand guignol audacity of that story will likely be disappointed by the film.

There's plenty to praise in the movie, though, and before I detail why I think Diblasi's screenplay tames the story and saps it of any interesting meaning, I do want to make it clear that my objection is primarily to the screenplay. The cinematography and production design are often excellent, sometimes strikingly so -- every wall in this film seems rich with texture, the colors and lighting are frequently more evocative than anything going on in the plot, and some of the framing of shots is gorgeous (what's in the frame is often grimy or grotesque, fitting the events of the story, but the image composition is nonetheless beautiful). And there's some good gore, too.

The acting isn't as bad as it could be, either, especially given some of the lines the actors have to deal with. Not having seen the Twilight movies, I wasn't familiar with Jackson Rathbone, but he delivers a likeable and sometimes surprising performance, quirky and light, a bit reminiscent of young Johnny Depp. The problem most of the actors face is that the script nearly requires them to seem self-indulgent, like acting students practicing audition monologues.

The problem, yes, is the script.

(Below, I'll be talking about the plot of the movie and story, including the ending. Go away now if you don't like that kind of talk.)

The original Barker story focuses primarily on the relationship between Stephen and Quaid as Quaid makes Stephen an accomplice to his ever-more-sadistic attempts to study people's fears. Stephen then becomes one of Quaid's subjects of study, this pushes him into insanity, and he becomes exactly the creature Quaid himself most feared -- and Quaid ends the story tortured, consumed by dread, yearning for the relief of death.  Stephen triumphs over Quaid and achieves power, but he loses his sanity, which is his sense of himself and his knowledge of his own motivations.

In the movie, Stephen is, at the end, subjected to some of Quaid's tortures, but he doesn't go insane. He chooses to resemble something he knows (or at least strongly suspects) Quaid fears -- a man wielding an axe -- after a friend, Abby, mutilates herself in response to Quaid's taunting. Stephen feels some guilt for not better protecting Abby and for rejecting her offer of love. One of Quaid's other victims is also in the hospital, and he is insane. He sees Stephen, remembers he was associated with Quaid, and follows him when Stephen goes to Quaid's house. The insane boy, Stephen, and Quaid stalk each other, the boy misses in his attempt to kill Quaid and instead kills Stephen, and Quaid blows the kid's brains out. Quaid then goes to another room to visit one of his other victims, Stephen's girlfriend Cheryl, who suffers the same torture she does in the story, but who has not been set free in the world as she is in the story -- instead, Quaid keeps her locked up and drops Stephen's dead body into the room with her, implying this is all he's leaving her to eat.

It's an amusing enough ending in its gleeful sadism, but it's also a cop-out. It renders Quaid victorious and renders Stephen ineffectual -- he's revealed to be the failure he's pretty much seemed to be throughout the film. Nothing he does amounts to anything.  He knows this, and he dies knowing it.

The film is too enamored of simple psychological explanations for everything. Quaid is a sadistic psychopath because he watched his parents be killed by an axe murderer. Cheryl is a vegetarian because of scarring experiences when she was younger. Abby is self-conscious because of a birthmark that covers half her body and makes her afraid that she will never be seen as "normal". Most of the various people who are filmed for Quaid and Stephen's fear project have fears tied to particular experiences. It's all very tidy.

This is in contrast to the original story, where only Stephen's fear is given much explanation. In the movie, that fear and some of that explanation are given to the kid who kills Stephen, and Stephen is given just a basic fear of death because his brother died in a drunk driving accident.

It's vastly more disturbing, though, for only one character in a story to have explicit motivations than for everyone to be as explicitly motivated as they are in the movie. When I said the script nearly requires the actors to seem self-indulgent, this is what I meant: that it does what basic acting exercises do and gives the characters very clear motivations for Big Stuff that allows the actors to explore major emotions. Actors, particularly young and less experienced ones, tend to love that sort of stuff -- it lets them emote, it lets them show off. Later, if they have some training and some skill, they'll learn that good acting actually works to counter those desires, but unless actors are intuitive geniuses, they tend to need to go through the first stage, and a lot can be learned from such work. But a director does actors a disservice by putting such moments in a finished film.

Interestingly, there's a moment in the movie that suggests some knowledge of this. Quaid attacks one of the subjects and reveals that she's made it all up because she thought it would be good material for her audition reel. The thing is, nothing in her behavior suggests she's much different from anybody else who has been a subject, including Cheryl. This is one of the most compelling moments in the movie -- for a second, it seems possible that everyone is lying to Quaid, embellishing the traumas of their lives because they know they're in front of a camera and so are aware, to some extent at least, of their performance. Quaid, in his lust for the right sort of fear, can't tell. He then tortures people, making real what was previously just pretend.

Alas, the movie doesn't follow this idea through. If DiBlasi wanted to change the conclusion of the story, that would have been a more effective and compelling approach than the one he took. He destroys the wonderful peripeteia of the original story, jettisons the power of the over-the-top surreal insanity by bestowing it on a minor character, and replaces it all with a fatalistic conclusion to a psycho-drama. There's lots of filmmaking talent on display in Dread, but it's mostly wasted by the script.
Clive Barker film horror Movies