And what comes then comes from my friends who love their guns? This, now making the rounds of the gun nut Facebook page nearest you: 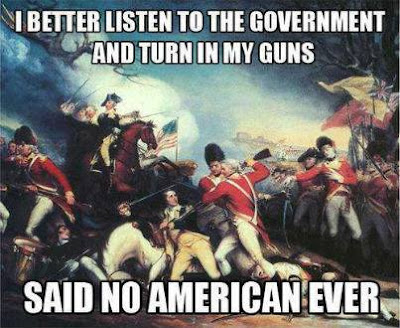 Welcome to the world the NRA has created. Sure, some people demand that we do something!, but it's theatre. Nothing gets done. True, most of the proposals for what to do are hasty and only vaguely more informed than the above graphic. (I've long been skeptical that we can do much of anything about gun violence in the US, given the realities. Still, practical, reasonable measures could help — treat guns like cars, for instance. But such ideas are politically impossible.) The general lack of quality to our national conversation on guns is not some fluke. It was created and is sustained by wealthy interests. The NRA fundraises and fundraises, lobbies and lobbies. Their leaders will do their best to look sad and concerned and serious, but don't miss the dollar signs in their eyes. They've spent decades training a solid subset of their membership into paranoia, which for the NRA means training those people to respond to tragedies by sending money and spreading macho idiocy.

Funding for studies by the CDC of gun violence has fallen 96% since 1996. The Bureau of Alcohol, Tobacco, Firearms, & Explosives has been crippled by the NRA's minions in Congress. Including blackmarket weapons, there are almost certainly more guns than people in the U.S., but they're owned by a minority of the population. And only a small group of that minority buys into the paranoid ideology of the NRA. But boy do they buy into it. They buy the gear and they buy the hooks, lines, and sinkers. They buy and they buy and they buy.


And the gun industry loves them. Paranoia equals profits for the manufacturers. The promoting of paranoia is strategic: the industry knows that gun ownership is declining, and so anything that encourages the core gun buyers to buy more and more and more means that profits are protected. Obama may have gotten no new laws (meaningful or symbolic) passed, but that doesn't mean people stopped believing he was going to send his Kenyan Socialist Gestapo to take all their guns. Sales (and prices) skyrocketed when he was elected and have continued to stay high, with any talk of gun control leading to more panicked buying — so much so that ammunition shortages have consistently arisen, generally whenever one of two things happens: 1.) Democrats are elected; 2.) a massacre dominates the headlines. (Of course, the shortages were really the fault of the government stockpiling to prevent honest, gun-loving citizens from protecting themselves!)

Want to make money even in a difficult economy? Get a Federal Firearms License and open a gun shop. The best locations are in states with lax gun laws of their own that border states with tougher gun laws. You'll get lots of loyal customers, many of them wealthy, from over the border. Stock mostly military-style guns and pistols, the sorts of things that the liberal politicians are always complaining about. Stoke your sense of being a rebel and also your sense of being an oppressed minority (nobody understands the healthy, Constitutional need for lots of guns except your friends and customers; even some of your family members may look askance; people judge you, they don't understand you, they probably want to disarm you and make you weak and vulnerable, but you'll show them, won't you?). Jack up your prices. Remind your customers that the jackbooted thugs will be confiscating these guns as soon as they can get their grubby pinko hands on them. Best to own ten. No, ten's too few. The more you own, the less likely it is that the people who fly the black helicopters will be able to find them all. And you know about the ammo shortages, right? Do you really want to be caught without enough ammo when the shit goes down? Don't you have a family to protect? Don't you have a sense of your own patriotic duty? Well, then, don't ever have fewer than 5,000 — no, preferably 10,000 rounds of ammo for each of your weapons. Because you never know. Have you heard what they're talking about in Congress? Have you seen the latest bulletin from the NRA? Well, then you know things are dire, friend. Maybe you should buy another. Just in case. You never know...

Don't tell anybody, but be sure to vote for Democrats. Business isn't all that great when a Republican is president. The customers get complacent and some of them begin to wonder what they need all those guns for, all that ammo. Encourage your customers to help the NRA, but you yourself should probably donate to the Brady Campaign, because it does wonders for business. You can spew all sorts of toxic rhetoric about them in the shop, but you know that the people who publicly call for major gun control laws are helping to make you rich. Enjoy the irony. Enjoy the money. Enjoy the tragedies.
guns politics