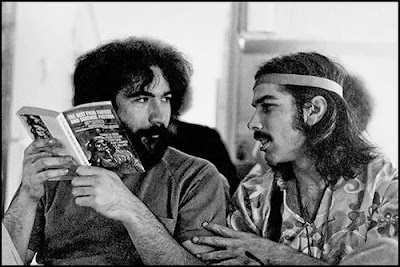 A friend sent me the above photo this morning. "You probably know more about Sci Fi and Fantasy publications than anyone I know," he wrote, "so can you possibly identify the book that Jerry Garcia is reading in the attached photo. It would mean a lot to thousands of Deadheads."

I like a challenge. The picture is of such low resolution I almost couldn't make out anything helpful about the book, but I was determined. The title seemed long and the more I stared at it, the more it looked like some sort of anthology title ... The Best something? ... maybe a best of the year collection? ... no, best of fantasy and science -- The Best from Fantasy and Science Fiction, I bet. I've got a few copies of that longrunning series of stories from the venerable magazine, but all mine are old hardcovers picked up at library sales. I'm not sure I've ever even seen one of the paperbacks, or knew that there were paperbacks of the series. But God invented ISFDB for just such moments. I didn't know which volume of the series this was, but figured if I looked up some of the paperbacks from the 1960s, I might be able to figure it out. I tried the 18th first. No, but the text and layout looked like I was maybe in the vicinity. So I just kept trying.

And there it was. The Best from Fantasy and Science Fiction, 14th Series.

I was particularly amused to see that the ever-wonderful Kit Reed had a story in the book ("Automatic Tiger"). I stuck the info on Facebook and asked her if she'd gotten a fan letter from Jerry. Alas, no. But still, it's nice to find direction around some corner where it's been waiting to meet you.
history Magazines Music science fiction