Nadine Gordimer has died at the age of 90, a significant age to reach, and yet, as always with the loss of a major figure (particularly one who stayed active and known) it feels like a robbery. We are greedy, we living people.

Writers satiate some of our greed against death by leaving us with their words. Gordimer's oeuvre is large (she began publishing fiction in South Africa in the late 1940s), and her fiction in particular will live long past this moment of her body's death.

Because Gordimer was so active in the anti-apartheid struggle, and her writing so often addresses the situation in South Africa at the time of its writing, it is easy to fall into the trap of reducing her to a political writer and to ignore or downplay the artistry of her work. She sometimes encouraged this view in her essays and interviews, but she also understood that she was not a propagandist, telling Jannika Hurwitt in 1979, "I am not by nature a political creature, and even now there is so much I don’t like in politics, and in political people—though I admire tremendously people who are politically active—there’s so much lying to oneself, self-deception, there has to be—you don’t make a good political fighter unless you can pretend the warts aren’t there."

Gordimer is often contrasted (sometimes by she herself) with the other white South African Nobel laureate, J.M. Coetzee. In that frame, Gordimer is the engaged realist, Coetzee the disengaged postmodernist. Like any caricature, this one contains some elements of truth, but it hides as much as it reveals. Though Gordimer had a bit more faith in the ability of words to represent immediate reality than Coetzee does, and was more comfortable participating in political arenas and writing about the recognizable here-and-now, both writers are strongly influenced by European high culture, particularly European Modernism — Kafka is a key influence for both, though Coetzee tends to wear that influence more obviously.

One of the qualities I value in Gordimer's work is her ability to show how people of different backgrounds and ideologies grapple with political ideas in their lives. She's often portrayed as an explicitly political writer because she writes about people embroiled in politics. In her best writing, she understood quite powerfully the difference between showing people engaged in politics and making her work into propaganda for a particular political line.

That's a wonder for me of a novel like Burger's Daughter, which I wrote about here in 2009. It shows politics in life, politics as life. It is at times merciless toward characters who could be considered the ones a nice, liberal reader is supposed to feel sympathy and affection for. It never forgets Renoir's great line from The Rules of the Game:  "The awful thing about life is this: everyone has their reasons."

Gordimer's range is best demonstrated by her short stories, such as the parable-like "Loot", which I wrote about in 2010. Especially in the later decades of her career, her stories frequently experimented with form, perspective, and subjectivity — which is not to discount the powerful effect of her many rich, detailed, fiercely realistic stories (her Selected Stories from the mid-'70s remains a high point to me of her work).


The view of Gordimer as a writer of her times, for her times, limited to her times might try to prevail. That would be a shame. Though she certainly chronicled ways of living in South Africa throughout the last 60+ years, that specificity does not in any way make her work less important for us now. It is, rather, differently important — and as necessary as ever. 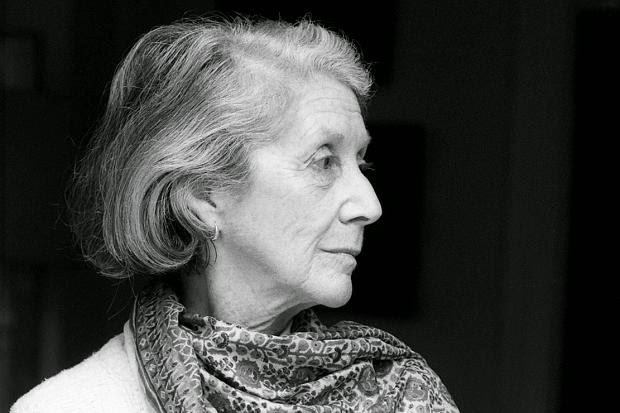