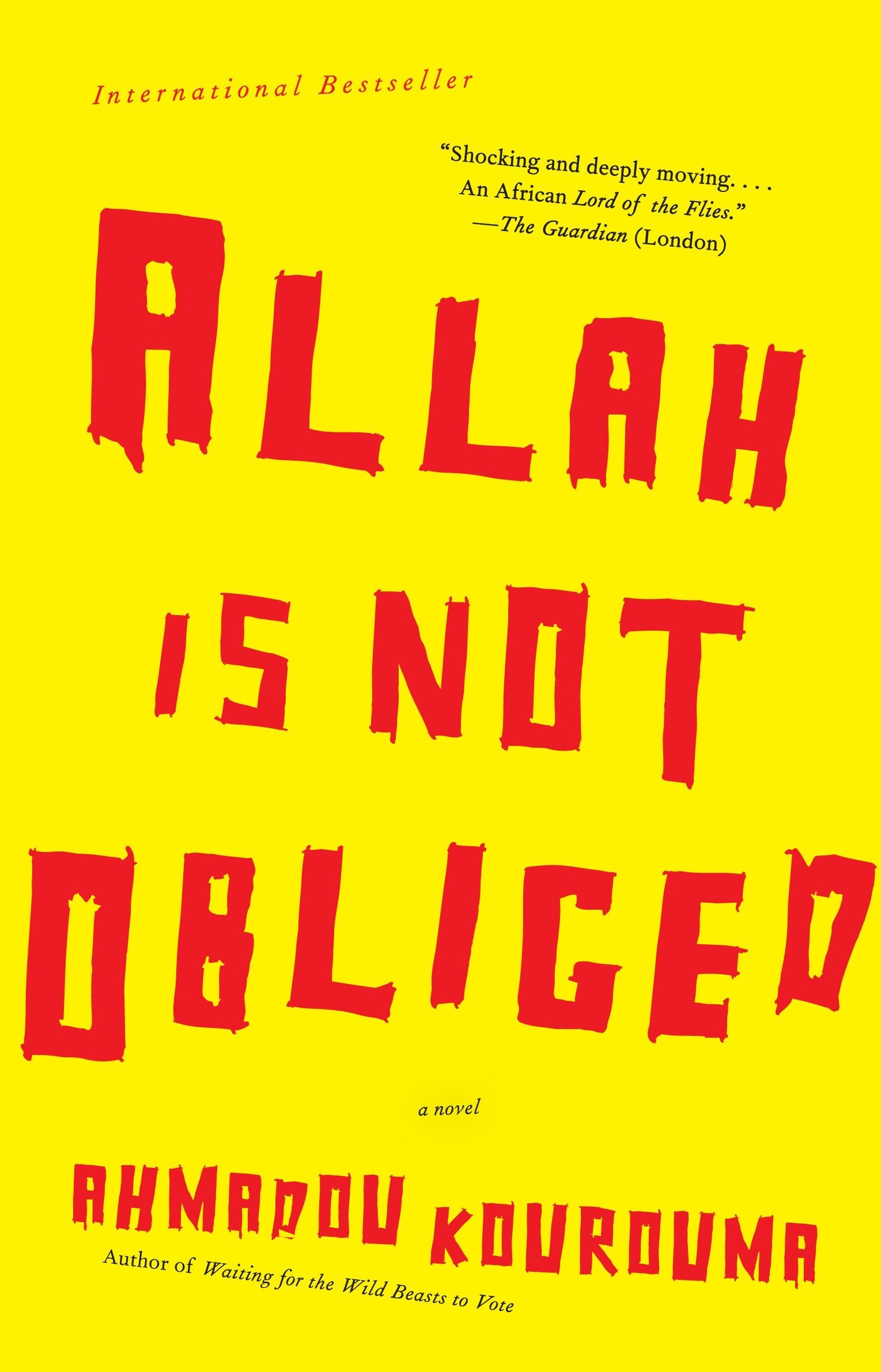 This review originally appeared in the Summer 2007 issue of Rain Taxi.

First published in Paris in 2000 as Allah n'est pas obligé, and now arriving in the U.S. for the first time, Ahmadou Kourouma's final novel is the harrowing story of a child soldier in Côte d'Ivoire and Liberia in the 1990s.  It is a story of adult atrocities perceived (and committed) by a child, but ultimately it is something other than that, a fiction that shows how fiction can—and, perhaps, should—fall apart when asked to bear the weight of the real horrors of the world.

Though his four novels are as yet almost unknown within the United States, Kourouma's reputation in France is strong, and he received various awards before his death in December 2003. Born in 1927 in Côte d'Ivoire, he spent time during his childhood in Guinea and Mali before going to France for school and later to Indochina as a soldier with the French colonial army. He returned to Côte d'Ivoire after it gained independence in 1960, but, after clashing with the new government and being imprisoned, ended up in exile in Algeria, Cameroon, and Togo before once again returning in the 1980s to his home.

Allah Is Not Obliged begins boldly: “The full, final and complete title of my bullshit story is: Allah is not obliged to be fair about all the things he does here on earth.  Okay.  Right.  I better start explaining some stuff.”  Thus, we are introduced to our narrator, Birahima, who tells his story to an unidentified audience for whom he explains a nightmare gallery of “stuff” in a one-man show of profanity and atrocity, profundity and absurdity—as if Candide and Gulliver were summoned by a grigriman and made to dance on the grave of Conrad's Kurtz.

Birahima, for all his vulgarity and naïveté, proves to be at times omniscient, offering detailed histories of not only the characters around him, but also of the political situations that create the wars he joins and the warlords he serves.  He has inherited four dictionaries from a dead man, and he uses them to tell us definitions of words from French or pidgin or African languages.  Sometimes this is a technique of satire, sometimes it is a way to provide meanings for words that most readers would be unlikely to know, and occasionally it seems to be the part of the novel that suffers the most from translation, as words and phrases that are, in English, likely to be ones a child would know are defined for us, perhaps because in French they are more obscure.

The verisimilitude of Birahima's monologue encounters too many obstacles for the voice to hold together as anything other than a convenient tool of the narrative, a way for Kourouma to portray certain events and comment on certain subjects.  This is not simply a fictionalized version of a child soldier's story.  We certainly see much that is expected in such a story—the families and villages destroyed, the leaders who rise to heights of power from which they fall to ignoble deaths, the suffering, the insanity—but again and again the plausibility of the monologue cracks and splinters, forcing us to reflect on the fact that there is literally too much here for any one boy to know.  We watch Birahima try on the words of the worlds he travels through, without any understanding of what words his audience already comprehends. We see him attempt a pose of cynicism and indifference, a shield made from recycled phrases, a callousness that he falls back on when he gets carried away and then remembers someone is listening. He explains the machinations of various leaders, the ebb and flow of causes and effects, the meaning of actions that seem tragically meaningless.  He chronicles people and armies and nations.  Much is filtered through the warping lens of his consciousness, but much is presented with a certain sort of objectivity, too, or at least authority, like a newspaper report or well-preserved legend.

Toward the end of Allah Is Not Obliged, Birahima gives his longest history lesson, a section of about twenty pages where, with only occasional and small breaks, he tells us all about Sierra Leone's warlords in the 1990s. As names and dates pepper the pages, all pretense of this being the testimony of a young boy disappears, though some of his familiar phrases and locutions remain, and the story is told with a wearily satirical edge.  It is as if in the face of such horrific absurdity, Kourouma lost faith in the persona offered by fiction, as if he could not stomach pretending that the litany of abominations came from an imagined character's mouth, as if even so strong a voice as Birahima's could not carry such a burden of truth.

Allah Is Not Obliged might have been a more satisfying book if Kourouma had tried harder to make Birahima's monologue more plausible, but it would not have been as thought-provoking and challenging, nor would it have been able to encompass as much as it does. All readers know that fiction is a game, a dream we agree to enter; great writers know when the games should pause, when the dreamers should awake, and when the enormities of reality should not be forced to fit in a neat and symmetrical form.
Africa Cheney publications novels Rain Taxi reviews