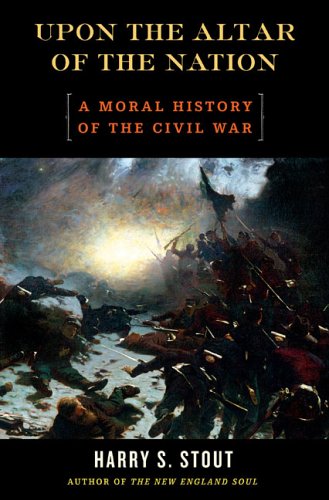 This review appeared in the Summer 2006 issue of Rain Taxi.

Upon the Altar of the Nation:
A Moral History of the Civil War
by Harry S. Stout
Viking

Any history of the U.S. Civil War is a moral history, because the brutal events of the war have little meaning in and of themselves, and so historians must put forth interpretations and arguments about not only how, but why such blood was shed.  The paradox any historian must confront, though, is that the Civil War, while inevitably draped in moral evaluations, is rich with contradictions and complexities that render all moral judgment at best reductive and shallow.

"Instead of declaring the Civil War a just war dictated by prudent considerations of proportionality and protection of noncombatants," Harry Stout writes, "I argue that in too many instances both sides descended into moral misconduct."  Though this is hardly a revolutionary thesis, Stout builds evidence for his argument with stubbornly repetitive clarity via a brisk presentation of the war's battles and strategies mixed with material from sermons, letters, newspaper accounts, and political speeches.  The real interest of the book lies not in Stout's superficial and persnickety moralizing, but in particular details, because though his philosophy is too leadfooted to encompass the enormities and intricacies of the war, he does a fine job of laying out the major events and showing how propaganda from politicians, pundits, and preachers spun those events into a whirligig of self-righteous destruction.

Stout is a Yale professor of American religious history, and one of the strengths of Upon the Altar of the Nation is the information it provides on how religious leaders of both the Union and the Confederacy supported and inflamed the political goals of either side.  From chaplains who blamed the early battles on profanity and drunkenness to later apocalyptic interpretations of the greatest bloodbaths of the war, the reader can see how blind the vast majority of religious leaders were to anything other than the excellence of their own chosen cause.  The complicity of religious leaders in strengthening the citizenry's taste for war surprises and dismays Stout, who seems to believe both in the possibility of gentle warfare for just causes and in the ability of religion to pacify people's most barbaric impulses.

"Were leaders in power able to see both sides as right and wrong," Stout says, "then alternatives to war might be explored.  But in an atmosphere of absolute right and wrong, with God in control and demanding the total surrender of sin and evil, few could escape the trap."  Stout excels at portraying the absoluteness of the beliefs that propelled the country into war against itself, but his analysis of these beliefs is unsatisfying, because his grandly moderate theories of just war cannot reconcile all the contradictions at hand: the utter evil of slavery, the brutalities of soldiers and commanders, the hypocrisies of people fighting for a moral cause, the generosities of people fighting for immoral purposes.  He tries to extol Abraham Lincoln as a model of rational compassion, but the Lincoln he portrays is a man hell-bent on creating total war to preserve the union, a pragmatic zealot who uses the cause of slavery only when it is a convenient way to rally support for his other aims, and someone who will support any action so long as it furthers the ends he desires.  Stout thinks he has found in the Civil War a series of events with which to illustrate ideas of how a war can be just, but what his narrative shows is that philosophies of morality fall apart when applied to those events.

Civil War scholars are unlikely to find much interest in Upon the Altar of the Nation, but despite its weaknesses, it is an adequate book for a general reader, because it does at least indicate some of the complex and contradictory details necessary for any understanding of the period: the racism of many Northerners, the suffering inflicted on civilians of all ideologies, the maneuverings and uncertainties of political and religious leaders, the use of culture for propaganda, the conditions of prisoners-of-war, the blinding power of self-righteousness.  Stout set himself up for failure by proclaiming his ability to judge the morality of the Civil War, but despite its failures, Upon the Altar of the Nation is an often interesting and occasionally illuminating book.
Cheney publications history Rain Taxi reviews