June 23, 2006
Not being anything more than an occasional viewer of horror movies, I hadn't heard of Cemetery Man (aka Dellamorte Dellamore) until Dave Kehr mentioned it in his "New DVDs" column in the New York Times. It sounded like good fun, and not more intellectual than my brain can handle right now, and so I asked the Netflix gods to send it my way, and they did. 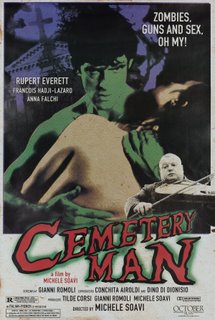 Cemetery Man has all the best elements of a low-budget horror movie -- special effects where the strings used to fly items are visible, cheesey music, gratuitous sex and violence, hilariously bad dialogue, terrible acting -- and yet it's also got some good acting, some clever dialogue, good zombie gore, and a surprisingly intelligent narrative overall. It's some sort of cousin of Shaun of the Dead (but with more nudity, because Rupert Everett is the sort of leading man one does want to see naked as much as possible).

Set in an Italian town where everyone speaks, or tries to speak, in a British accent, Cemetery Man tells the story of Francesco Dellamorte, caretaker of a cemetery where people come back to life soon after they are buried. He's used to this, and has gotten to be quite a good shot with a pistol, effortlessly putting bullets into the heads of the dead. His sidekick is a somewhat-less-than-genius sort of fellow named Gnaghi, who ends up falling in love with a severed head. Love is a running theme in the film, because Francesco has failed to find any, and rumors about his impotence and even his genital status have spread through town. Why, Francesco wonders, should anyone bother with love when everybody's just going to die, anyway? Then he meets the woman of his dreams. She's impressed with his ossuary. They kiss like Magritte's "Lovers". But her father comes back to life and kills her. Whoops. Francesco begins to think he was right about this love thing: It just leads to suffering. Every other attempt at love doesn't work out, either, because Francesco's easy to take advantage of, and the women he decides to love (all of whom look alike), reel him in and break his heart. Clearly, the only way to deal with this is to start killing living people. But even at that task, he can't get the credit that's his due. In the end, he and Gnaghi go to the edge of the world and have a transcendent moment of their own.

It's a remarkably touching movie by the end -- remarkably, because on the surface, there's very little reason for us to have a lot of sympathy for Francesco. Everett's performance is so well balanced, so delightfully deadpan, skillfully conveying the character's indifference to the vapid, uninspiring world around him that he somehow becomes endearing instead of being what so many similar characters in movies and books are -- pathetic. And Gnaghi's great, too. I wanted one of my own. His character could have been a silly stereotype of a village idiot, and while it certainly has plenty of those qualities, he ends up (much like Ed in Shaun of the Dead) a full character.

None of the women in the movie are much more than cardboard objects of lust, but because the film is so stuck within Francesco's point of view (complete with voiceovers), there's not much else they could have been. It's not like any of the male characters, other than Gnaghi, have any development, either. Francesco sees the world as populated by people not much worth his time, or people he obviously has neither the emotional experience or capacity to understand as anything other than figures onto which he can project his own desires and anxieties. How we interpret Francesco -- who may just be a sociopath -- determines much of how we interpret the other characters in the movie.

Regardless of how anything is interpreted, there are plenty of moments in Cemetery Man that are, however you figure their purpose or meaning, just plain fun and funny. My own favorite moment involves a bunch of boy scouts at a funeral and the song they sing. (Actually, every scene involving the boy scouts had me cracking up, but I tend to find boy scouts inherently humorous.)

Cemetery Man isn't particularly suspenseful, because the humor often undercuts the suspense, and Francesco's blase attitude toward everything undercuts what's left, but it's nonetheless a movie full of surprises, because the story twists and turns enough to provide plot elements for five less carefully crafted films, and the thematic underpinning to it all is strong enough to keep viewers interested even when events seem almost random. The ending is surprising and haunting, but in an emotional rather than horrific way.