June 19, 2006
I spent some time in Provincetown, Massachusetts with friends this weekend, but we only had time to see one film at the film festival that was happening there, a documentary by Barbara Hammer, Lover Other, about the surrealist writer and artist Claude Cahun (Lucy Schwob) and her step-sister/partner Marcel Moore (Suzanne Malherbe). 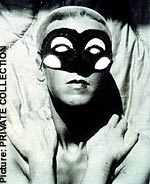 The best parts of the film were Cahun and Moore's artwork and the interviews with people who had known them when they lived on the island of Jersey, where, during the German occupation, they resisted the Nazis and were imprisoned. Unfortunately, Hammer tried to make the film into something more than a documentary by having actresses portray Cahun and Moore for some overwrought soliliquies and used annoying and amateurish visual stylizations in an attempt to replicate with film the effect of the original art, an unfortunate choice when the original work is so distinctive that any such manipulation is nothing more than distracting, and sometimes simply embarrassing, like particularly bad public-access TV.

Cahun and Moore's work was lucky to survive World War II and the artists' deaths (Cahun in 1954, Moore in 1972). It was not recognized as important and groundbreaking by the general art world for quite some time, which seems strange when you look at the images themselves. 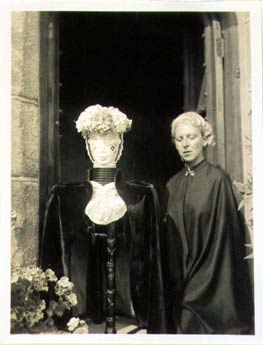 The playfulness of the poses and roles that Cahun assumes gain a strange seriousness from the deadpan facial expressions, the often gender-neutral costuming, the lack of context for the figures -- where is this, who is this, what is going on? The pictures are worlds unto themselves, vivid in their oddity, rich with emotional suggestion, but the emotions they suggest seem a little bit different to me every time I look at one of the pictures. Sometimes there seems to be a profound melancholy within them, sometimes a beautifully coy "let's pretend" goofiness, and more often than not a combination of feelings that can't quite be named. Cahun's body is the subject of most of the photographs, but it is a nearly-blank body, one she and Moore recognized could be reconfigured and reimagined. Because of this, Cahun can be seen as a precursor to artists like Cindy Sherman, but her work makes sense within its own time, too, given how many artists were exploring ideas of subjectivity and how many writers were experimenting with voice and point of view -- Cahun is not so far away from Virginia Woolf's Orlando, really.