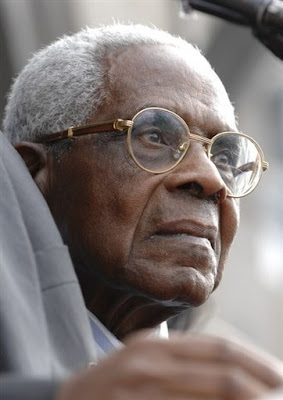 Via Pierre Joris's blog, I just learned that the great writer and politician Aimé Césaire has died.

I didn't pay much attention to Césaire until grad school, when one of my favorite teachers (and later one of my thesis readers) was Keith Walker, whose particular specialty is francophone literature and whose particular interest is Césaire. His passion transferred to me, though I can't read French, so I've been stuck with the few English translations of Césaire's many works. Last year, I used Césaire's play A Tempest

and excerpts from his Discourse on Colonialism

in my AP Lit class (to go along with Shakespeare's Tempest), and I would do so again in a heartbeat, because it blew the kids' minds (in a good way).

Keith Walker told me a story that I only remember vague details of, but I'll tell what I can of it here. He used it to explain to me when he had fallen in love with Césaire's work himself. He was at school in France, and his roommate had covered the ceiling over his bed with writing -- beautiful, stunning, strange words. Keith asked him what it was, and learned that it was lines from Césaire's great poem "Notebook of a Return to the Native Land" -- his roommate had written those lines above his bed so he would see them just before he fell into sleep and be welcomed by them every morning. Keith was stunned that a poem could have such power for a person, and he sought out Césaire's work (and eventually Césaire himself). He said that in Martinique he went to a political rally that was as much like an interactive poetry reading as it was a political event, and that what really impressed him was that so many ordinary people held this supposedly "difficult" writing so close to their hearts.

If you don't know Césaire's poetry, The Collected Poetry

as translated by Clayton Eshleman and Annette Smith is utterly marvelous. (A brief excerpt from their translation of "Notebook of a Return to the Native Land" is available online.)