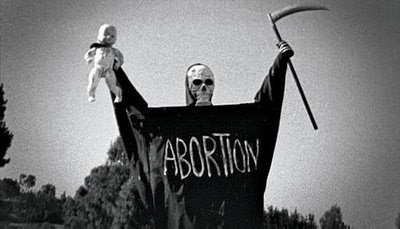 I put off watching Tony Kaye's documentary Lake of Fire for months, because it's seldom that I'm really in the mood to watch both raving Christian fundamentalists and explicit medical procedures within a single two-and-a-half-hour period.

And Lake of Fire is full of both. Its primary concern is to depict both sides of the wars over abortion clinics in the 1990s, a time when quite a few people were killed by anti-abortion extremists. We see the picket lines and protests, the people protecting women going into clinics and the people trying to convert them. We hear a lot from various preachers and activists and philosophers and sociologists. We watch abortion procedures and see what gets dumped into the tray in the sink. We see crime scene photographs of doctors who were murdered and women who bled to death after trying to prevent their own pregnancy. At the end, we follow a woman into a clinic and watch as she goes through counseling and the procedure, and then sits, exhausted, afterward and talks about how she feels. She doesn't doubt she made the right choice, but she can't help collapsing in tears.

Various critics and viewers have praised Lake of Fire for being even-handed, for not having a point of view. This isn't exactly the case. The point of view is utterly clear by the end -- the issue of abortion is a complex one, and there are no simple answers. It is no accident that the film ends with a woman who is certain of her choice and yet, as she says, full of all sorts of thoughts. The final image is of her with her head in her hands, sobbing. The editing of the movie deliberately leads us step by step through juxtapositions that give the most gravity and force to moments of complexity: the film's tag line could easily be, "There are no easy answers."

Tony Kaye, who previously directed commercials and American History X (and pretty much made himself into a pariah/clown), nearly destroys the documentary's ability to present a reasonable case for or against abortion by his fascination with extremes. It takes a massive effort of empathy to even begin to understand the worldview of most of the anti-abortion activists in the film if, like me, you think of yourself as someone who values reason and thought. Maybe it's impossible -- maybe they're really all as far off the edge of rationality as the folks in the film. (I paused the movie to watch Rachel Maddow, who devoted some time to the craziness of Sarah Palin, whose views seem to be similar to those of the right-wing extremists in Lake of Fire. Hooray for progress!)

Kaye tries to balance the crazy fundamentalists with people who are often considered leftist extremists -- Noam Chomsky, Peter Singer -- but it would be a rare viewer who would not see them as calm, thoughtful, rational, and relatively sane when cast against people who claim that anybody who uses the word "goddamn" ought to be executed. One of the few people offering an anti-abortion position that doesn't seem to have been smoked in fire and brimstone is Nat Hentoff, who proclaims a "seamless" pro-life position of being against not only abortion, but also the death penalty, war, poverty, etc. (basically the "consistent life ethic").

It's notable that the only pro-choice person in the movie who comes off as even in the same league of craziness as the fundamentalists is a rock singer who covers her breasts with electrical tape and sticks a coathanger in her crotch. She becomes the concrete representation of the anti-choicers' vision of fundamentalist feminism -- naked women screaming jungle music!!! -- just as most of the openly gay people in the film are at protests where they're in full camp mode. As the fundamentalists scream against blasphemers and sodomites, across the police barrier stand the personifications of their fears. Maybe they deserve to be faced with those personifications, but as cinema the effect is a levelling one: everybody's a freak!

Lake of Fire is about things other than just abortion. It is, for instance, about men's opinions of women's autonomy. Certainly women are major players in the film, and are the protagonists of most of the most powerful scenes, but the commentary is dominated by men. Women's bodies are central to the most vivid and memorable images, and yet the most forceful anti-abortion voices are those of men, the few women who are provided as commentators are mostly given less time to speak than the men, and all of the abortion doctors in the film are men. Women counsel and help, but they are more often the objects, not the subjects, of action and commentary.

Thus, for all my admiration of Tony Kaye's craft (the cinematography and editing are often exquisite) and his obvious commitment to representing a complex issue in its complexity, I fear that his film almost collapses into an obsession with extremism and ultimately a fetishization of women's bodies as things to be acted upon and talked about, legislated and sentimentalized, violated and repaired -- instead of lived in.

And yet... I said "almost collapses", and I meant that almost. Because in the end, we watch one woman, her difficult experiences, and her conflicting and overwhelming emotions. The only extremism we are left with is the extremism of her life and all its challenges -- abusive relationships, depression, financial instability -- and the dreams and hopes and wonders she hesitantly, but powerfully, expresses. For me, at least, it was enough.
abortion feminism film fundamentalism Movies politics