July 03, 2013
Today is Franz Kafka's 130th birthday, as Google has reminded us, and it reminded me that one of the first and most obscure stories I published was largely about, or at least inspired by, Kafka. I'd been reading the diaries and the letters to Felice Bauer.  I'd dipped into the diaries before, reading around in random order, but had never read them very comprehensively, which is a considerably different experience. While the diaries were fascinating, if sometimes tedious, I loathed the Kafka that came through via the letters to Felice. How she put up with him is beyond me. (The relationship would become clearer when I read Reiner Stach's excellent Kafka: The Decisive Years, which has now been completed in English with the translation of Kafka: The Years of Insight, a book I've just recently begun reading.)

All this reading got me thinking about narcissistic heterosexuality, fragmentary identities, and, somehow or other, the relationship of patriarchy to imperialism. Also, Kafka's great story "A Report for an Academy".

And so I wrote a thing called "Fragments" (truly one of my most creative titles!) and it was published in 2005 in Rabid Transit: Menagerie edited by Christopher Barzak, Alan DeNiro, and Kristin Livdahl. At the risk of utterly defiling this auspicious day, here it is: 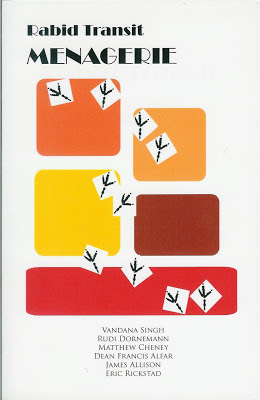 but when I say "love", I don't mean lust — it's not coming from plain, old, uncomplicated sexuality.  It's more tender than that.  Which is why it's confusing when it starts to be sexual. You attract me on many levels, and the sexual level is the least powerful.  And I think if you really stop and consider, it's probably the same for you with me.  You're in love with the idea of me, but you're not in love with the actuality, the real physical eating-drinking-pissing-shitting-fucking woman that I am.  I'm not what you really, truly want.
I feel so cruel writing what I have, but I would feel more cruel if I let you continue trying to woo feelings from me that I simply cannot give.  I would give you my life, Pete, but I can't give you all of my heart.
I hope that you won't give up on our friendship.  I hope that you won't decide it's all or nothing with me, because I care about you as much as I have ever cared about anyone.  I meant it when I said I have worked hard never to lie to you, and I don't think I have ever lied to you, but I don't want you to think all this doesn't hurt me, too.
Ten years from now I hope we'll look back and laugh at all this silliness.
Send me another story, would you?  I miss reading your stories.  I miss being your muse.
I miss you.

11 February.
When I sit across from you like this, when I listen to you talk, I forget, always, that you are who you are, and only slowly, when I have pulled myself out of my own thoughts and back to reality, do I see who it is in front of me.

24 February.
How many steps are there up to my room?  It is better that I don't know, because if I did, then I would be afraid of running out of air before I reached the last step.

Still I cannot get the words right.  The river has become a puddle in which all thoughts of the future sink into the mud.

I must continue work on the story and not think about things I cannot change.  It is better to live in dreams than to live

#
3 March.
I told her that when the war ended I would take a leave of absence and we would have an apartment together, but that was a lie, because no war has ever been known to end.

9 March.
Blind, worm-like beasts crawl across a mossy landscape and dive into the soil.

I dream of confinement, of a tiny cell similar to my own room, a place of sharp shadows and dank air, where I lie in chains, writhing, starving, chewing on my fingers and the flesh of my arms.

Her eyes, white and blank.

31 March.  I should like to write a comedy, because I am too old now to play the part of the pretentious suffering artist.  That role is for adolescents, because they do it best.  I want to amuse someone, to be amusing.  And yet here I am, court jester long after court jesters have gone extinct.  The castle is a tourist attraction, the king a footnote on the tour.
I met her when I could not write, and she brought me words.  Horrible words forged in fire, words that seared me.
I should be more ashamed of it all, but the only shame I have is from the night I huddled on the floor, shuddering and moaning, and she held me, tried to coax me through it, helped me to bed and sat with me until I fell into the peace of sleep.  I never wanted her to take care of me.  I never wanted to be so weak.
I merely wanted a muse.
Now I wish I could write a story about nothing at all, a story that has no connection to the external world, a story completely held together by the inner force of its style.
A muse within the words themselves.  That is the only way to freedom.

Editor's Note: Passages obscured by indecipherable handwriting and/or ink blots, as well as passages removed by order of the Office of the Minister of Culture &  Security, are indicated with bracketed asterisks [***].


My apologies for drifting once again into polemic.  My time has come to an end, and I hope you will forgive me if I have not been able to satisfy your curiosity fully, or if my careless philosophizing caused you to lower your opinion of me.  I came here merely to report on my experiences of life so that those modest experiences might help spread human knowledge and compassion, and so it is as a humble reporter that I take my leave of you, gentlemen, and allow you to draw whatever conclusions you will.
Cheney publications Kafka