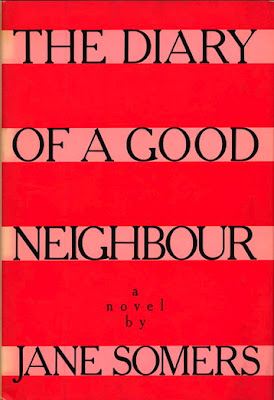 When crime writer Robert Galbraith was revealed to be J.K. Rowling, I of course thought of Richard Bachman and Stephen King, but I also thought of Jane Somers and Doris Lessing. Lessing wrote and submitted two books under the Somers pseudonym, they were rejected by her publisher (Jonathan Cape) in Britain, and when they were eventually published by Michael Joseph in the UK and Knopf in the US, they were barely noticed and didn't sell well.

The story itself is interesting and, as these stories tend to do, reveals much about the power of expectations created by a recognizeable writer's name.

Now, in a short piece at the New Yorker website, James Lasdun has revealed himself to be the in-house reader at Jonathan Cape who rejected Lessing's first Somers novel. Once Lessing's ruse was revealed, it seems he was a bit of a laughingstock, which is unfortunate — I expect most, if not all, of the people who criticized him for rejecting the book would probably have done the same themselves. (And not because it's a terrible book. I haven't read it. But because any manuscript by an unknown writer has huge hurdles to jump. Most of us are more patient, more thoughtful, more prepared when reading something with a byline we recognize, because we have a template of knowledge and expectations to fit it into. That gets magnified when you're reading from a slush pile, where, to just get through it all, you have to read quickly.)


Lasdun notes that his expectations for what is or isn't "good" in literature were narrow:


“Good,” for me at that time, meant tight and clever and stylistically showy. The idea that failing to see the merit of The Diary of a Good Neighbour might have been a reflection of my own limitations rather than the book’s had no resonance for me at all. My mechanism of judgment was as ruthless as it was narrow.

Of course, if you're helping to decide whether to publish something, you need strong mechanisms of judgment, but that kind of narrowness seems to me endemic in so many groups of readers: a "good" books must be "tight and clever and stylistically showy" — or, for many readers, it must not be that, because that's the stereotypical book full of pretentious stuff that gets in the way of just telling in a good yarn. (Although I can't resist the obligatory note that whether something is stylistically "showy" depends on the common conventions of writing that render a norm.)

What's really interesting to me here is the effect of the experience on Lasdun, because it, too, speaks to expectations:


None of my bosses ever criticized me for my report, but occasionally at parties people would say, in scandalized tones, “Weren’t you the reader who….” I was arrogant enough to shrug it off, but I must have felt stung at some level because, consciously or not, I reacted by setting up an untraversable barricade in my mind against Doris Lessing. I wouldn’t—couldn’t—go near her work from then on.

Lasdun finally, after thirty years, was able to bring himself to read The Golden Notebook, and he loved it, and he wished he had read it in his twenties, and he regrets the loss.

Books become tainted by the world, both the social world and our personal worlds. I sympathize with Lasdun's inability to read Lessing after his experience — how could he avoid associating her name with an emotional memory of the awkwardness and perhaps even embarrassment around the Jane Somers incident? How could he possibly read her books without some sense of his own ego tied to them — the fear would have been, I expect, not of disliking them, but just the opposite. How could he face himself if he really admired and enjoyed those books?

Though Lasdun's experience was uncommon, his reaction wasn't. Reading and evaluating are intimate experiences, they express something about who we are, or who we perceive ourselves to be. What does it mean to like a book by a writer you previously loathed? What does it mean to admit the narrowness of a previous judgment, especially a judgment that in some way or another had some sense of stakes, or the need to pick sides. Can you read the work of a writer who somehow revolts you — someone whose public statements or behaviors are obnoxious, idiotic, arrogant, absurd, destructive? Part of me wants to be able to say that I would of course never let anything other than the text itself influence me, but intellectually I don't believe texts exist in a vacuum, and emotionally I know I respond to all sorts of extra-textual stimuli.

I had quite the opposite experience with Doris Lessing. In my early twenties, I devoured a pile of her books: The Golden Notebook, The Four-Gated City, The Good Terrorist, The Fifth Child, Mara and Dann, The Sweetest Dream. These were important, vivid books for me. I loved them all, and partly I loved them because early on in my reading I had decided I loved Doris Lessing's writing, and so I would give it all the benefits of every doubt, I would see myself as failing rather than the writing as failing if there were something I didn't understand or love, etc. It's a marvelous, generous way to read. It led to experiences with books that I still remember strongly and fondly. But after bingeing on Lessing for a year and a half or so, I didn't return to her work except in small bits — a story here, an essay there. She was the right writer for me at the right time. I hope to go back to her work someday, but I'm also afraid to. I'm a different person now, a different reader, and I don't want to destroy the memory of what it was like to devour Lessing one page after another.

Perhaps the writers we should revisit after a decade or two are the ones we thought we loathed, not the ones we loved. That's what James Lasdun did, and it led to a powerful reading experience. I don't think he should feel sorry about that at all. The great blessing for any reader is to find the book we need when we need just that book.
books Doris Lessing pseudonyms reading Writers