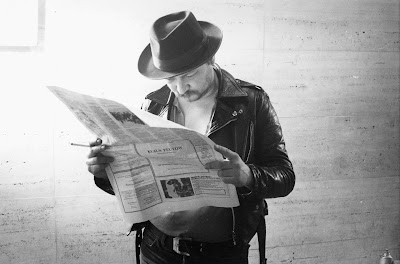 Yesterday was the 70th birthday of my favorite filmmaker, Rainer Werner Fassbinder. He wasn't around to see it, having died at age 37, but I celebrated for him by watching Querelle again. (I was tempted to do a Berlin Alexanderplatz marathon today, but I do actually have to get some work done...)

I've written various things about Fassbinder over the years, so here's a roundup and then some 70th birthday thoughts:


In the US, the best access to Fassbinder's films is via Criterion's Hulu Plus channel, where there is access not only to the various films Criterion sells on DVD (with the exception of Berlin Alexanderplatz), but also to films currently unavailable otherwise in the US, including some masterpieces: Mother Küsters Goes to Heaven, Fox and His Friends, Effi Briest, Marriage of Maria Braun, Veronika Voss.

Fassbinder isn't around anymore to make some wishes on his birthday, so I'll make a few in his stead...

Of course, my primary wish is for everybody on Earth to recognize and celebrate Fassbinder's genius. But I can be more specific:

My greatest wish is for a release of Eight Hours Don't Make a Day. As far as I can tell, it's never been released on home video anywhere, and has hardly ever been shown since its premiere on German television in the early '70s.

Criterion is doing a good job of putting together excellent home video versions of many of the films. With luck, they'll solve whatever rights problems led them to put their wonderful BRD Trilogy set out of print, and will continue releasing extra-features-rich versions of the major films, as they recently have with The Bitter Tears of Petra von Kant and The Merchant of Four Seasons. I hope, given that they've been able to stream them on Hulu, Effi Briest, Fox and His Friends, and Mother Küsters are in line for similar treatment. I'd love to see a "Queer Fassbinder" set: Fox, In a Year of 13 Moons, and Querelle together, preferably with good commentaries and essays to help viewers work through the wonderful challenges those films offer.

Finally, we need someone to write a good, comprehensive biography. There are a few good Fassbinder books out there (my favorites of Thomas Elsaesser's Fassbinder's Germany and Wallace Steadman Watson's Understanding Rainer Werner Fassbinder, along with Juliane Lorenz's collection Chaos as Usual: Conversations About Rainer Werner Fassbinder), but there's no good biography that I'm aware of. (Robert Katz's 1989 biography is an atrocity and shall not be spoken of.) Telling the story of Fassbinder's life day by day would be a tremendous, perhaps impossible, challenge, but the attempt would be worthwhile because it's so difficult to get a sense of how those days fit together — he would work on a film while also working on stage plays and radio plays, writing new scripts, getting financing for upcoming works, traveling to festivals — it's dizzying just to think about.

Fassbinder continues to offer riches to us even now. I wish, of course, that he'd made it to the age of an elder statesman (I'd trade significant portions of my anatomy to see what he would have done with digital cameras), but he lived so fast, so productively, and so brilliantly that though he died young, we're still working through his oeuvre in a way we aren't with even great filmmakers who lived to ripe old age. So happy birthday, RWF. We're celebrating even in your absence.
Criterion Collection Fassbinder film Movies