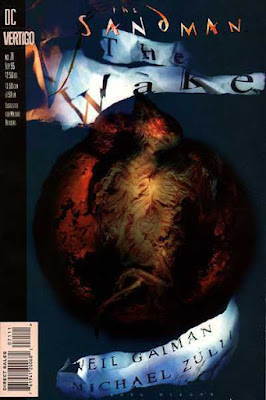 Boomtron just published my latest Sandman Meditation, this one on Chapter Two of The Wake.

In July 2010, I started writing a series of short pieces called Sandman Meditations in which I proceeded through each issue of Neil Gaiman's Sandman comic and offered whatever thoughts happened to come to mind. The idea was Jay Tomio's, and at first the Meditations were published on his Gestalt Mash site, then later Boomtron. The basic concept was that we'd see what happened when somebody without much background in comics, who'd never read Sandman before, spent time reading through it all.

I wrote 71 Meditations between July 2010 and June 2012, getting all the way up through the first installment of the last story in the regular series, The Wake. 75,000 words.

And then stopped. I read Chapter 2 of The Wake and had nothing to say. I tried writing through the lack of words, but the more I tried to write the more what I wrote nauseated me. I couldn't go on.


I got through 71 Meditations by only looking back once — in the piece on "Ramadan", I misread a word (yes, one word) and completely misunderstood the story. When Neil gently brought the mistake to our attention, I was shocked. So I went back and re-read "Ramadan" and what I'd written about it. Though in the immediate moment, I felt like a total idiot with entire chicken farms of egg on my face, I've come to cherish that mistake, because it showed just how carefully and subtly constructed so much of Sandman is, and how a simple slip in reading can make a text flip all around. It gave me a certain freedom, too. I'd always been terrified of making some dumb, obvious mistake in my reading of Sandman, because I know it's so well known by its passionate fans, and I didn't want to either let them down or annoy them. Once I made that big mistake, I felt somehow freer to go wrong, and that kind of freedom is necessary for writing. I went forward, trying hard not to think about whether I was writing well or terribly, thinking well or thinking badly, reading well or reading as if I'd never learned to read at all.

But by the 71st installment, my confidence fell apart. I was terrified that I'd written nothing but drivel, and the weight of that fear pulled me back. Why should anybody want to waste time reading what I've got to say about this? I wondered. This is a beloved series of comics, a beloved story full of beloved characters, an intricately woven tale that I'm just blundering through blindly. I couldn't do it.

Eric Schaller kept bugging me. "So are you ever going to finish your Sandman stuff?" he'd ask, and I'd change the subject.

I figured as more time passed, everybody would forget about my crazy reading experiment.

Jay Tomio remembered. I felt terrible for letting him down. He'd been so supportive, and I'd failed in the end. But he never seemed to hold it against me; he seemed to understand. It had been a long run. Boomtron went through some changes. The Meditations disappeared for a while. Then Jay started reconstructing, and so out of the blue one day I got a note: "Any chance you'd like to continue?" he asked.

I was terrified. A lot had changed. What would it mean to continue?

But continue I did, and continue I will. (I'll finish The Wake in the coming weeks, then continue on to Endless Nights. If all goes well, I think it would be fun to finish up with the recent Overture, to return full circle back to the beginning. Fingers crossed.)

As you'll see from the new piece, I thought of David Beronä, and I knew exactly what he'd say if he were here for me to ask about it. "Use the time you have," he'd say. "Do it now."

It's nice to be back.
Cheney publications comics Neil Gaiman Sandman Meditations