What's in a Book 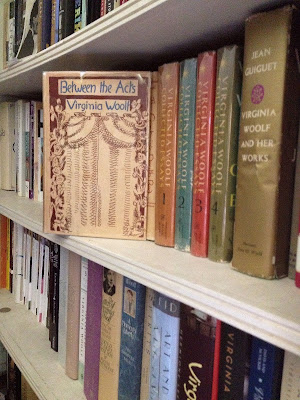 I recently bought a miscellaneous set of Virginia Woolf books, a collection that seems to have been put together by a scholar or (in Woolfian parlance) a common reader during the 1960s and 1970s. The set included some volumes useful for my research purposes, as well as all four of the old Collected Essays that I have long coveted because though they have been superceded by the six-volume Essays of Virginia Woolf, they are far more elegantly designed and produced (alas, copies in nice condition rarely seem to go up for sale at a price a normal person can afford, even on a splurge). At about $6 per book, it seemed like a deal I'd likely never see again.

One of the joys of giving books a new home is that they sometimes share glimpses of their history. This is for me the primary impetus to own an old book. They become tools for imagination, not only through the words on their pages, but through their physical presence. I have lived with books my whole life, and have come to imagine their writing, production, sale — what was it like to pick up this well-worn volume when it was bright and new, its binding still tight, its pages crisp? What led to this page being dog-eared, what caused this tear along the dust-jacket's edge? Who was the child who drew in crayon on the first pages? Most importantly: What did it feel like to read these words when they were first in this form?


...is it not possible — I often wonder — that things we have felt with great intensity have an existence independent of our minds; are in fact still in existence? And if so, will it not be possible, in time, that some device will be invented by which we can tap them? I see it — the past — as an avenue lying behind; a long ribbon of scenes, emotions...

Sometimes an old book provides more. I once picked up an old copy of Ibsen's play Rosmersholm at a library book sale for maybe 50 cents, and discovered inside some newspaper clippings: a review of a production of the play in the early 20th century, and an obituary for Ibsen from 1906. (I later gave the book and clippings to a friend who got her PhD studying Ibsen's work.) Such items allow a sense of time traveling: What might it have been like to know only what was known on that day in 1906 when Ibsen's obituary appeared?

This set of Woolf books provided a similar surprise. In the front of a nice hardcover copy of Between the Acts, Woolf's final novel, sat this: 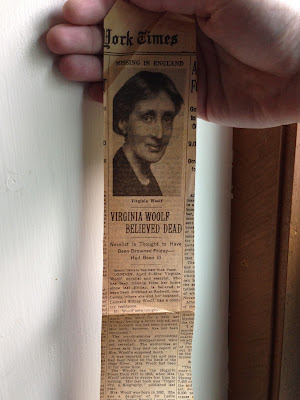 We live now in a time when Woolf's struggles against depression and mental illness are in many ways better known than her work, and yet in that moment in 1941, I imagine it was quite a shock to many ordinary readers that this very successful woman, whose novel The Years had been a genuine bestseller, whose face had been on the cover of Time magazine, would have her life end this way.

It was 74 years ago, and yet, in the moment I held that bit of yellowed newsprint taken from a book printed only a few months later, it was now — and I couldn't breathe, and I closed my eyes, because Virginia Woolf was gone.

And then I breathed in, and I opened my eyes, put the clipping back in its book, and looked at the words there on the pages ... and Woolf was with us again.


What is meant by "reality"? It would seem to be something very erratic, very undependable—now to be found in a dusty road, now in a scrap of newspaper in the street, now a daffodil in the sun. It lights up a group in a room and stamps some casual saying. It overwhelms one walking home beneath the stars and makes the silent world more real than the world of speech—and then there it is again in an omnibus in the uproar of Piccadilly. Sometimes, too, it seems to dwell in shapes too far away for us to discern what their nature is. But whatever it touches, it fixes and makes permanent. That is what remains over when the skin of the day has been cast into the hedge; that is what is left of past time and of our loves and hates.

—A Room of One's Own