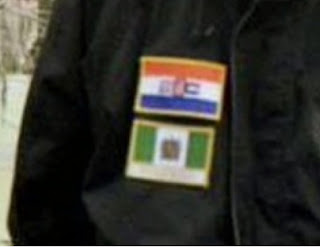 When the suspect in the attack on the Emanuel African Methodist Episcopal Church in South Carolina was identified, the authorities circulated a photograph of him wearing a jacket adorned with the flags of apartheid-era South Africa and post-UDI Rhodesia.

The symbolism isn't subtle. Like the confederate flag that flies over the South Carolina capitol, these are flags of explicitly white supremacist governments.

Rhodesia plays a particular role within right-wing American militia culture, linking anti-communism and white supremacy. The downfall of white Rhodesia has its own sort of lost cause mythic power not just for avowed white supremacists, but for the paramilitarist wing of gun culture generally. 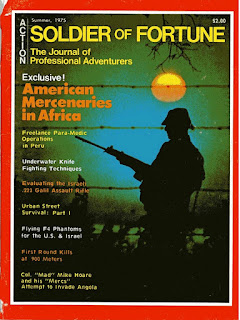 The power of Rhodesia for paramilitarists is evident throughout the history of Soldier of Fortune magazine, a magazine that in the 1980s especially achieved real prominence. The first issue of SoF was published in the summer of 1975, and its cover story, titled "American Mercenaries in Africa", was publisher Robert K. Brown's tale of his visit to Rhodesia in the spring of 1974. (You can see the whole issue here on Scribd. Warning: There's a gruesome and disturbing picture of a corpse with a head wound accompanying the article.) For Brown's perspective on his time in Rhodesia, see this post at Ammoland. It's also worth noting that Brown has been on the NRA executive board (he was up for re-election earlier this year) and served on some NRA committees. He's right in the middle of the US gun industry and its publicity machine.

SoF continued to publish articles on Rhodesia throughout the 1970s and into the early 1980s. They also published articles about South Africa. Here's a two-page spread from the August 1985 anniversary issue (click to enlarge): 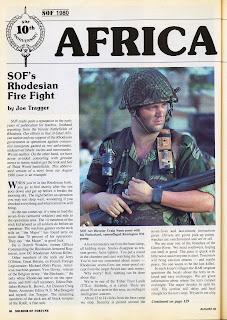 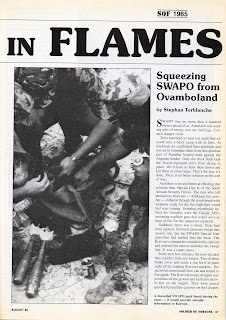 The introduction to the first article states:


SOF made quite a reputation in the early years of publication for fearless, firsthand reporting from the bloody battlefields of Rhodesia. Our efforts in that ill-fated African nation and our support of the Rhodesian government in operations against communist insurgents gained us two unfortunate, undeserved labels: racists and mercenaries. We are neither. On the other hand, we have never avoided consorting with genuine mercs to insure readers get the look and feel of Third World battlefields.

It's true that anti-communism was the primary ideology of SoF in the 1970s and 1980s and that they would take the side of anyone they considered anti-communist regardless of their race or nationality — they published countless articles supporting the mujahideen in Afghanistan, the Karen rebels in Burma (heroes of Rambo 4), and the contras in Nicaragua. (Ronald Reagan, he of the Iran-Contra scandal, supported white Rhodesia even longer than Henry Kissinger, causing them to have their first public disagreement. See Rick Perlstein's The Invisible Bridge pp. 671-673.) But the kind of anti-communism that supported Ian Smith's Rhodesia and apartheid South Africa was an anti-communism that supported white supremacist government.

The second page there begins an article written by a veteran of the South African anti-insurgency campaigns, and it sings the praises of the brutal Koevoet (crowbar) unit in Namibia. Here's a passage from the next page: "It doesn't pay to play insurgency games with Koevoet. SWAPO had felt the force of the crowbar designed to pry them out of Ovamboland."

It's no great mystery why such campaigns would appeal to white supremacist groups, and why white supremacists would use the examples of Rhodesia and South Africa to stoke the fears and passions of their followers.

Consider the Greensboro massacre of November 1979. Tensions between the Communist Workers Party and the Ku Klux Klan led to the Klan and the American Nazi Party killing 5 activists. The neo-Nazi and Klan members accused of the crimes were acquitted. The head of the North Carolina chapter of the National Socialist (Nazi) Party of America in 1979 was Harold Covington, who was implicated in the massacre but never faced criminal charges. Covington loved to brag that he'd been a mercenary in Rhodesia, though his brother claimed that wasn't quite accurate:


I suppose he wanted to move someplace where everything was white and bright, so after a yearlong stint at the Nazi Party headquarters, he wound up going to Rhodesia, and he joined the Rhodesian Army. In different blogs and writings, he was always bragging, "Oh, I was a mercenary in Rhodesia and I went out and did all this fighting." But to the best of my knowledge, according to the letters he wrote to my parents, he was a file clerk. He certainly never fired a shot in anger. He started agitating over there, and the [white-led] Ian Smith government said, "We have problems enough without this nutcase," and they bounced him.

The myth of the lost white land of Rhodesia has proved resilient for the paramilitary right. It plays into macho adventure fantasies as well as terror fantasies of black hordes wiping out virtuous white minorities. Rhodesia sits comfortably among the other icons of militia culture, as James William Gibson showed in his 1994 book Warrior Dreams, in which he described a visit to a Soldier of Fortune convention:


All the T-shirts had their poster equivalent, but much else was available, too. John Wayne showed up in poses ranging from his Western classics to The Sands of Iwo Jima (1949) and The Green Berets (1968). Robocop and Clint Eastwood's Dirty Harry decorated many a vendor's stall. An old Rhodesian Army recruiting poster with the invitation "Be a Man Among Men" hung alongside a "combat art" poster showing a helicopter door gunner whose wolf eyes stared out from under his helmet; heavy body armor and twin machine gun mounts hid his mortal flesh. (157-158)

Anti-communism doesn't have much resonance these days, and so the support of Rhodesia or apartheid South Africa can no longer be couched in any terms other than ones of white supremacy — terms that were previously always at least in the shadows. Militarism, machismo, and white supremacy have no objection to hanging out together, and the result of their association is often deadly.

See also: "The connection between terrorist Dylann Roof and white-supremacist regimes in Africa runs through the heart of US conservatism" from Africa as a Country.
Africa culture guns politics Rhodesia South Africa terrorism violence white supremacy