August 28, 2007
To start off Barzak Day here at The Mumpsimus, I offer Chris's responses to a questionnaire I created (mostly from other questionnaires, including The Proust Questionnaire, Tom Disch's poem "Questions Your Children are Certain to Ask", a SFWA Fantasy Worldbuilding Questionnaire, a couple of Cosmo quizzes, the book Here Speeching American


To what faults do you feel most indulgent?
Permissiveness. I permit myself to indulge my other faults far too often. Dr. Spock didn't know what he was talking about. 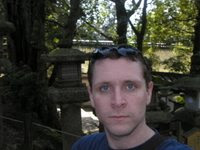 Your favorite virtue?
There are too many! And from which category of virtue? Buddhist? That would be Right Mindfulness - Mental ability to see things for what they are with clear consciousness. Samurai virtues? That would be To manifest great compassion, and act for the sake of Man. Western virtues? Justice. Roman virtues? Veritas, honesty in dealing with others. Christian virtues? Love.

How do the different prohibitions grow
On fenceposts and the trunks of trees?
They don't grow. They are nailed there by busy busy prohibitionists.

Do you have any favorite diseases?
The mumps. [Ed. note: not The Mumpsimus. An entirely different disease. Really. We swear.] It swells your face like a balloon. I got the mumps from a friend in Japan (Hey Katie!). Both our immunizations must have either worn off or weren't effective on the version over there. I spent a lot of time watching my jawline disappear. I thought this was kind of interesting, but only because I knew it was temporary.

Immediate unfriendly argument inspiring topics: Literature. I don't know how many times I've seen English majors and writers and critics brawling after that first beer. It's not a pretty thing to see.

Do you ever envy women who you think are prettier than you?
ALL THE TIME. I CAN'T STAND THOSE B*****S!!!

Do you run after your own nose?
Never. It knows better than to run off like that.

Are certain clothes customary for certain occupations -- e.g., military uniforms, judges robes/wigs, sports teams uniforms, etc.? How much variation is allowed -- could a scholar wear a day-glow green robe as long as the cut is right, or would that be too much? Is it color or style that is most important?
Well, of course certain clothes are customary for certain occupations, as you list examples. Variation should be permitted though. In both style and color. I would like to see police officers dressed in pink, bikers in crushed velvet rather than leather, strippers in wool suits, businessmen wearing sandals. Uniformity is death.

If you were a message t-shirt, you would read...
This.

Are you haunted by the horribles?
Sometimes.

Do the only real philosophical questions have to do with ontology? Are all others transcendental and therefore meaningless?
Nah.

Where do you get your ideas?
Why buy someone else's troubles? (This is also what my father says about used cars).

If you were a (toy) stuffed animal, what stuffed animal would you want to be?
A Catbus from Miyazaki's anime film My Neighbor Totoro. Those smile really wide and long.