August 25, 2007
At The Valve, John Holbo just posted this cover from the June 1953 issue of Famous Fantastic Mysteries: 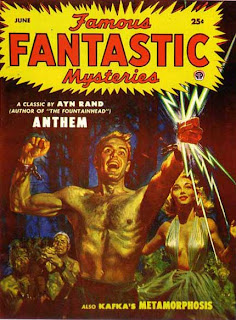 Yes, indeed -- Ayn Rand and Franz Kafka in one pulp magazine together! But it's better than that. Here's the entire table of contents:

Yes, Robert E. Howard, Ray Bradbury, Ayn Rand, and Franz Kafka all in one issue! (All reprints -- I would love to know what went through Mary Gnaedinger's mind as she put it together...) As noted at The Valve, this was the final issue of FFM, "after which the magazine evidently died of confusion."

on the internet is going for $61, and it usually sells for around $100 or more. If anybody out there has bucks to burn and wants to send me a gift, though, I wouldn't complain... (It's the mix that's appealing; even in high school I thought Anthem was badly written, and I've never had much of a taste for Robert E. Howard, but that contents page is enough to cause the covetous consumerist impulses to stir in even the most mild mannered of us.)