May 14, 2011
Blogger, the service I use for this here blog, had a 20+ hour outage, and posts from May 12 disappeared for a while, which meant that shortly after I posted it, my interview with Maria Headley went away. (We could, I suppose, blame the outage on Egyptian gods angry with Maria for revealing their secrets...)

It took a while for everything to get back to normal, and I had to republish the post a couple of times to get the labels and date right again (apologies to anybody reading via RSS who felt like the post was stalking them). But all seems well now.

I've been using Blogger since 2003, and this is the biggest glitch I've encountered with it. There are certainly things I would change were I a programming genius who worked for the company, but as free services go, it's pretty great. I've used a few other blogging platforms for other projects, but among the free options, I've never found anything with the same kind of flexibility I'm looking for. And heck, anybody who uses computers ought to be prepared for some glitches. The timing of this one was particularly frustrating for me, but that's the way it goes sometimes.

I used Twitter to let folks know what was going on, and while I'm really not a very good Twitterer (not much of a Twit?), it's convenient at such moments.

And in honor of blogging and the internet, here's a picture of my cats, Oliver and Alex: 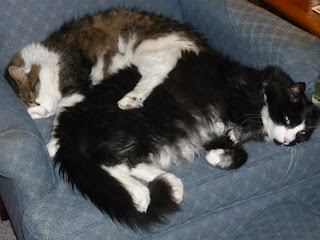